Keeping Myself Honest: My Pre-season Predictions Through Month One

Prior to the beginning of the regular season, I decided to try my hand at some pre-season predictions for our Toronto Maple Leafs.

As fans, we always head into the season with an idea of how things will go for our team and we all know people that are quick to shout out 'I told you this would happen' at the drop of a hat.  Fair enough --  what good are predictions if you can't gloat a little bit -- but you'd better be prepared to take your lumps when you're wrong too.

In this spirit, here were my pre-season predictions and how they look so far.

Well, it's early but things are looking pretty good here.  Kessel's previous best was a goal every .514 games.  So far this year?  .909.  Kessel is lighting it up and making me look good.


2) Gunnarsson will not finish the year as a Maple Leaf

It's a bit early to eat crow on this one but Gunnarsson has been one of the Leafs' better defensemen and it's hard to imagine what the price would be to move the Swede out of town at this point.  The Leafs are still deep on defense but it doesn't look like Gunnarsson will be the one who pays the price here.

Liles was acquired for the 2nd rounder the Leafs picked up in the Kaberle deal (along with Colborne and Boston's first rounder last season).  When comparing Liles' play with Kaberle's so far this year, the move looks like sheer genius.  Liles is an even in the +/- column and has 7 assists so far this season while Kaberle has only 2 assists and is a -4.

4) Tyler Bozak will make you love him again

Bozak has yet to score so far this season but he's been a very productive member of the team.  His points-per-game is up from last season and after finishing last year at an astonishing -29, he's currently +3.  Good rebound so far.

5) More of the same from Grabovski and Kulemin

As things stand right now, Grabovski's per game numbers in goals, assists, and +/- are actually ahead of last year's.  Kulemin is behind last year's pace but he's played well and has been a little snake-bitten in the goalscoring department.  Once the puckluck regulates itself a bit, he'll be just fine.

6) Expect some big trades up front

No deals so far and no real imperative to make any.  This one will be tough to track until March but you'd have to say that at the moment the top six looks more or less set (when healthy).  Tough to see one of those guys moving unless Grabovski's contract demands are out of whack with management's valuation of him.

7) Our special teams will be much better

This prediction hasn't really borne fruit yet, but there's still lots of time.  The powerplay is certainly better jumping from 16% last year to 17.6% this season but the penalty kill has actually performed worse than last season's 77.5% and currently sits at 72.3%.  A lot of this prediction was predicated on improved systems implemented by the new assistant coaches as well as Tim Connolly's presence in the lineup.  Connolly has only played 3 games so far and new systems take time.  These numbers should improve as the season progresses.

8) Colby Armstrong will get a big suspension

His time on the IR might be the only thing that's kept him from Shanahan's office.  Still lots of time for this one to happen though.

So far, so good.  Reimer has played well in the early part of this year and has maintained his positive, aw-shucks attitude.  Here are his numbers compared to our most recent starters. 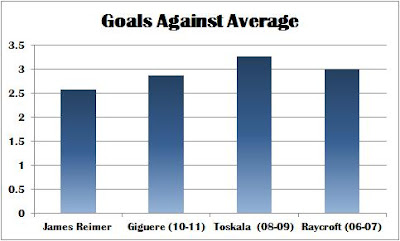 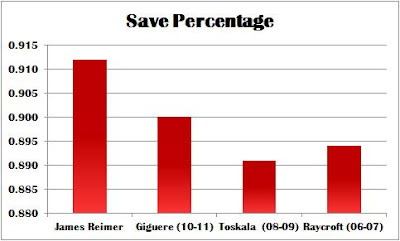 As well as the best save percentage.

So far, things have looked good the team's first line.  Lupul has played very well and Connolly had has two points in three games so far.  How Connolly responds to Kessel when fully healthy and Lupul's ability to fend off the streakiness that his plagued him throughout his career will be the keys to proving me wrong on this point.  I hope they do, but I'm standing by this one.