When Do Elite Players Become Elite? A Look At Later Picks, Kulemin, Grabovski, and MacArthur

Building on the analysis we started last week with elite players and when they tend to reach the upper echelon of point production in the NHL, I’ve had a look at some of our more veteran-types to see if there’s any opportunity for these guys to take their game to another level.

I think now would be a good time to have a quick refresher on our data-set.  What we’ve done is pulled all players who scored 70 or more points at least once during the past 3 seasons.  We’ve sorted these guys by their draft position and captured the ages at which they reached critical milestones for points or games played.  The idea is to be able to determine when stars breakout or when it may be too late to start expecting a guy to take another step.  Again, this is not about calling guys ‘busts’; it’s about seeing who has potential to be elite.

When comparing these three guys and their relative draft position with the players that we considered last week, it’s no surprise to see that their comparables based on draft position tend to be later bloomers.
The following graph shows players’ ages when they became NHL regulars (50+ games played in a single season).  Players in red were first rounders, while players in green were drafted in the second round or later. 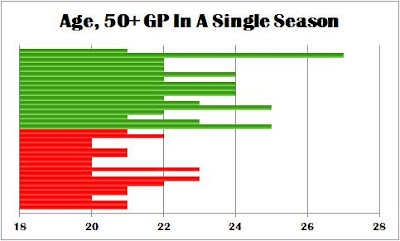 Unsurprisingly, the later a player is drafted, the older they tend to become NHL regulars.  Nikolai Kulemin became an NHL regular at the age of 23 which puts him slightly ahead of the average for this group.  MacArthur and Grabovski were 24 and 25 respectively.

The next graph shows the age at which these players achieved their first 70+ point season.  Again, Kulemin is 25, MacArthur is 26, and Grabovski is 27. 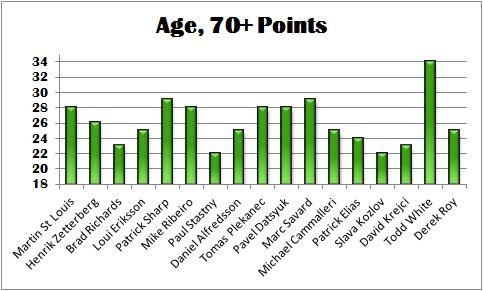 A quick look at the names on this list shows that there’s some real talent here.  Todd White is a bit of an aberration on the list as he only had one year of elite production and it happened at a late stage in his career.
The average age for a player to reach the 70 point plateau for the first time is a little over 26.  Again, it wouldn't surprise me in the least to see Kulemin reach this level of play in the next two years and he certainly looks to be keeping pace with these elite players.

If Grabovski is going to get here, the time is probably now.  The two players that I feel best compare to Grabbo are Plekanec and Ribeiro and both of those guys achieved the milestone at 28.  Suffice to say, if he’s going to get there, the clock is ticking.

MacArthur for me is a bit of a tricky case as there’s nobody on that list that I feel is a good comparison.  I suppose the conclusion that I would draw is that if a winger drafted in the 2nd round or later is going to be an elite point producer that blossoms late, they tend to be a superstar (Alfredsson, St. Louis) and I personally don’t see MacArthur as that calibre of player.


As of right now, I would say that Kulemin is on pace to join the NHL’s most productive players.  I love what he brings in all three zones and the fact that he even has the potential to put up 70 points is fantastic considering all of the less glamorous things he does.  Grabovski could go either way but he’s another guy that doesn’t need to put up 70 points to be effective.  If MacArthur is going to get to 70 points at any stage in his career he’s probably going to have to become a Cammalleri-type, which means taking a lot more shots than the 154 he took last season.
Posted by Curt S at 9:43 PM