Building on yesterday's post regarding players' breakout years, I've put together a couple more graphs so people can see some more individualized data.

If you're reading this blog, chances are you're a Leaf fan.  The key guys I wanted to look at were Kessel, Kadri, and Colborne.  Given this, I've provided data for all players who have exceeded 70 points in past three seasons who were drafted between the 3rd and the 20th pick overall in their respective drafts.

I've received a handful of requests asking to put some controls into the data set to try and mitigate some of the outliers.  When dealing with such a relatively small data set, I'm reluctant to pull out any of the numbers, so what I've done is provide all cases that fall within the defined ranges but presented each of them individually so you can draw your own conclusions (while of course offering some of my own). 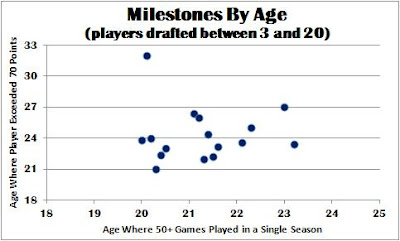 Above is an individualized scatterplot.  As you see, there are some outliers both in terms of the year where the players in question were able to reach 70+ points for the first time, as well as a couple of late-bloomers who reached 70+ points despite becoming NHL regulars later than their peers.

One player in particular seems to have taken a long time to develop into an elite point-producer (X20,Y32)﻿.

The general cluster of players tend to enter the league as fulltime NHLers between the ages of 20 and 22 and are generally producing 70 point seasons by the age of 26.  The vast majority of these cases hit the 70 point mark between 23 and 24.  Phil Kessel is now 24 years old and looks destined to join the ranks of elite point producers by year's end.

Now I know you're probably wondering who these players are.  In the graph below I've sorted the players based on their nominal draft position with Henrik Sedin at 3rd overall and Ryan Getzlaf at 19th overall providing the range. 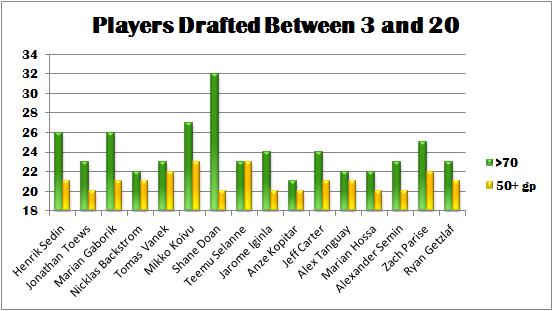 As you can see, Shane Doan is the biggest outlier in the data set.  His 'breakout' season as a top-tier point producer occurred at the age of 32.  You'll also undoubtedly notice that there are some pretty sexy names on this list.

Looking at these numbers in comparison with Kessel's output, he's right on track.  He was a fulltime NHLer at a young age (19) and if he can stay healthy, I expect he'll hit the 70 point mark this season at the age of 24.

The outlook for Nazem Kadri and Joe Colborne is a bit more uncertain.  While there are cases of elite players hitting the NHL fulltime at 22, most of the players in their draft range who meet our criteria are NHL regulars at 21.  For Kadri and Colborne this means by season's end (though Kadri is a later birthday, for what it's worth). The only examples of elite point producers hitting the NHL at 23 were Europeans (Teemu Selanne and Mikko Koivu).

The best chance for these guys getting to elite numbers would be for them to play 50+ NHL games this season.  Of course, forcing them to the NHL to hit these numbers doesn't increase the likelihood of this occurring -- this chart only tracks success stories, it doesn't take into account the wide range of players who never reach these totals.

I'm going to use the spreadsheet I've painstakingly created to look at Grabovski, Kulemin, and maybe a couple other guys in the coming days.  If you've got someone you're particularly curious about, throw their name in the comments section and I'll try to include them in the analysis (forwards only, please!).

Be sure to check us out on Twitter at bcphockey blog
Posted by Curt S at 4:50 PM