In 2005, Dion Phaneuf broke into the NHL like a wrecking ball.  Phaneuf made the Flames out of camp and played all 82 games, putting up 49 points and garnering a Calder trophy nomination.

Two years later, Phaneuf put up 60 points and was a Norris Trophy candidate.

Over a five year span, Phaneuf went from relative unknown to elite young defenseman to expendable.  Had you told a Flames fan in 2008 that Phaneuf would be traded to the Leafs for spare parts, you would have almost certainly elicited a derisive guffaw and yet two years later, that's precisely where we were.

Phaneuf had faltered in a big way and he was being paid as though he were one of the top 5 defensemen in the league.  His 47 points in 2008-09 weren't the problem, but his -11 was a real concern.  When he started slowly in 2009-10, the Flames panicked and Phaneuf was shipped.

The mood in Leaf Nation was one of tempered excitement.  Phaneuf was a name we knew, he had a history of elite performance, and he played the physical brand of hockey that we love out of our defensemen, but the holes in his game were apparent.  He needed to work on his in-zone coverage and defensive positioning if he was going to earn the money his contract was paying him.  If only, Leaf fans hoped, he could become the Dion of old.

So far this season, he's looked every bit of the defenseman that earned a Norris Trophy nomination.

There are two types of analysis in the hockey world; the statistical and the intangible.  From an intangible perspective, it's clear that Dion has more confidence.  He's pinching more regularly, hitting the net more often, and generally just looks better on the ice.

I wanted to have a look at some stats to see if there was anything underlying his revival or any trends in his career when he struggled. 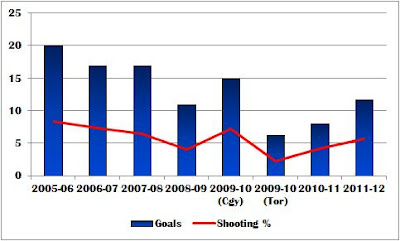 With Dion Phaneuf, you know you're going to get a lot of shots.  His goal production numbers correlate very strongly to his shooting percentage.  His career shooting percentage is 6% and yet with the Leafs prior to this season it hovered just above 3.5%.  So far this season? 5.7% or, roughly, his career average.

In Dion's best years, he hovered around 31-33 powerplay points per season.  Since 2008-09, his powerplay production has been between 21 and 12 points.  That's a hugely significant difference in production.  I then wondered how much of that is attributable to team performance and how much of that reduction should be shouldered by Phaneuf?

The correlation here is imperfect but it does exist.  The 2011-12 stats are projections based on both his and the team's current pace.  If we smooth the line out to account for a regression on his current pace, we can see that a lot of his dip in production is the result of being on teams that didn't perform as well on the powerplay.  This certainly shouldn't be surprising as that is where defensemen tend to get a large portion of their production.

2010-11 is a bit of an aberration as the team's powerplay seemed to be reasonably strong while Phaneuf's overall point production was relatively low.  Phaneuf took nearly 200 shots that season with a shooting percentage just over 4.  If he were to have achieved his career average in shooting percentage, he would have scored 4 more goals which would have further improved the correlation between the two measures.

Dion Phaneuf has certainly stepped up this season.  He's received praise for his play as well as his leadership and statistically speaking, he's getting back into form.  For Dion Phaneuf to put up the kind of point totals he did in Calgary, the team will need to improve on the powerplay, and Dion will have to see an improvement in his shooting percentage.  Leaf Nation certainly hopes this is sustainable and better special teams would go a long way towards making Dion an elite point producing defenseman again.