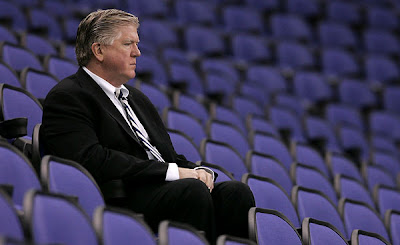 As Leaf fans, there are certain moments that are indelibly painted onto the landscape of our memories - you can recall down to the final detail where you were and who you were with when they happened: The Clark-Sundin trade, Gretzky’s high stick, Roenick's overtime winner, to name a few – and most recently, the Dion Phaneuf trade.

Through some divine miracle of either Brain Burke's genius or Darryl Sutter’s utter buffoonery we were able to package together all our spare parts and trade them in for one of the league's young, blue chip defensemen. Dion has his shortcomings to be sure, but with the benefit of hindsight we enjoy today, it’s impossible not to declare that trade a complete robbery for the Maple Leafs that would make Danny Ocean proud.

At the time of the deal there were no underground inklings of a Phaneuf to Toronto move, which made the announcement even more shocking. It was a quiet time for Leaf Nation in January of 2010, and in an instant out of the proverbial gates of left field, we acquired a bonafide star.

All signs point to a similar move in the future – Brian Burke has been uncharacteristically quiet of late, seemingly indifferent to the team’s fantastic and somewhat unexpected start to the season. Is he basking in the glow of his much maligned ‘master plan’ finally coming to fruition? Or is he so engrossed in trade talks with other GMs that there simply isn’t enough time in the day for media scrums? One of the first rules of general managing is to always deal from a position of strength. The Leafs are currently tied for 3rd in the Eastern Conference with 21 points and have shown great resilience and consistency in the early going, despite the loss of our number one goaltender.

The time is now to make the big move, Brian – to take the Leafs from a nice October story to a serious contender in May. Below I have listed some of the players that could be available in the coming weeks should Burkie dive into the trade waters. There are admittedly no guarantees that any of the following players will guide us successfully through the gauntlet that is the NHL playoffs this spring – but I’m keeping my schedule free for the June 16th weekend... just in case there’s a parade to attend.

Eric Staal – The Staal family has been dealing with the serious post concussion symptoms being experienced by the Rangers' Marc Staal as the result of a hit last May by brother Eric. It’s clear that Eric’s focus is not purely on the game, and his play has suffered as a result. Add to that the overall team struggles of the underwhelming Carolina Hurricanes and you have a perfect tonic for trade speculation. For Toronto, the 27 year old Staal would represent the big-bodied presence and proven scoring ability we’ve been searching for ever since a certain number 13 left for retirement...err, I mean Vancouver. Looking at the packages involved in the Carter and Richards trades this past offseason it’s clear we’d have to part with some considerable assets.

Rick Nash – For years leading up to Rick Nash’s pending contract expiration in 2009-10 with the Jackets we were told ad nauseam that he would be the Leafs prized target in free agency. Alas, the marriage never came to fruition as the nuptials were derailed by a handsome 8 year, $62 million dollar contract from Scott Howson. However, with Columbus struggling mightily out of the gate it’s possible both Nash and the team need a change. Certainly if Nash does become available on the open market the Leafs would have to be a front line bidder – as Rick’s size and elite power forward game would fit perfectly into our top 6 forwards. The Jackets have plenty of needs across the roster, and would no doubt demand the best of our prospects going the opposite direction.

Jason Spezza – A couple Halloweens ago I had a friend dress up as Jason Spezza, his costume consisted of the red #19 Senators jersey, and a giant bag of pucks. He walked down the streets of the Toronto handing out pucks to anyone and everyone. Yes, Spezza’s defensive commitment has been questioned in the past, but he’s about as proven an offensive commodity as you’ll find in the NHL. With 549 points in 544 career games he’s been extremely consistent since taking over as the number one centre in our nation’s capital. He’s a magician with the puck, with the ability to control the pace of a hockey game and make his teammates better. A Spezza-Kessel combination could lead to results similar to that of the seamless Spezza-Heatley connection of the mid 2000s. Ottawa is a team in flux, lacking the quality on their current roster to make a real run, and desperately in need of top quality prospects. Spezza is only 28, and under contract through the 2014-15 season at a somewhat bloated, yet manageable $7 million dollar cap hit.

Mike Fisher – It’s debatable whether or not Mike Fisher would benefit the Leafs line-up – given that we already have a gluttonous number of capable second line centers (Grabbo, Connolly, Bozak) it’s unlikely he’d be as effective as his years with Ottawa and more recently in Nashville. However, I would make this deal selfishly to improve my Saturday Hockey Night in Canada experience, as you can always count on the CBC to unapologetically provide close ups of Carrie Underwood coming in and out of every commercial break. If that’s not worth $4.2 million per season through to 2012-2013, then I don’t know what is.
Posted by Darren K at 4:28 PM