The Curious Case of James Reimer 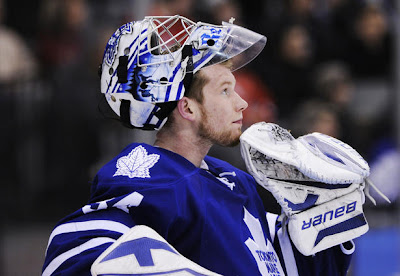 Our beloved Leafs have been outscored by a combined score of 12-1 in back to back trouncings by the Boston Bruins and, most recently, by the Florida Panthers. It’s clear that as a group the team may have some significant unresolved issues in the defensive zone.

While it’s not fair to hang the utter debacle of the last two games on our goaltending, neither Jonas Gustavsson nor Ben Scrivens have seized the enormous opportunity presented to them this past week. Gustavsson's win/loss record on the season is a respectable 4-4-1, however, a closer look at his skilled statistics reveals a 3.78 goals against average and a .878 save percentage. Perhaps even more disheartening is the Monster's increased propensity to allow at least one ‘ugly’ goal per outing.

Which brings us to the inevitable question: When will James Reimer return between the pipes?

It used to be a simple enough situation in the NHL – a player would get injured, doctors would examine and diagnose him, and the team would provide an update to the media and the fans alike on the expected return date.

Sadly, this is no longer the case as we can’t turn on SportsCenter, SportsNet, the Score, ESPN, or your sports media of choice without being inundated with “upper” and “lower” body injury updates.

I normally find this to be an entertaining exercise of futility, whereby media personnel ask GMs and coaches in as many different ways possible what exactly is wrong with the player – and to a man, across the entire NHL every team refuses to use any word outside of “upper” and “lower”.

I know there are arguments for keeping injuries top secret. The thought that others teams' players will intentionally target a player's injured area in order to create further damage – or, if the opposition is made aware of how long a player will be out they can more easily game plan against your line up.

Overall I find the entire injury reporting system to be outrageous, and unnecessary. (if the NFL can report injuries accurately why exactly can’t we?)

What makes the Reimer situation even more perplexing is that we all know what’s wrong with him. We all watched the game and witnessed Brain Gionta crash the net, making contact with James' head and sending his helmet flying to the corner. Initially, the Leafs reported he was bothered by neck stiffness – but evidently that too was considered overly detailed, and was scaled back to an “upper” body injury days later. At the moment, we don’t know how much longer Reimer will be out, nor how his upper body is progressing daily, nor his return date.

To set the record straight, we know James Reimer suffered a concussion – we know he is currently suffering from concussion-like symptoms – and we know that a “plateau” in his recovery, as reported by Ron Wilson last week, is code for ‘headaches’ during an on ice workout.

What exactly is the organization trying to protect Reimer from? Will other teams target his head more ferociously if they know he is recovering from a concussion? Let's remember that other teams already shoot a solid disk of vulcanized rubber at goalies' heads as hard as they possibly can regardless of their health status. Will teams crash the net in an attempt to hurt Reimer? All players are aware that blows to the head can cause concussions, so the secret is out that if you want to concuss someone, run into their head at a high rate of speed.

Is there some sort of conspiracy at play? Was Reimer secretly concussed while on the set of his Tim Hortons commercial this summer? (The spot was shot on a construction site, very plausible Reimer banged his head there – especially if he was distracted by the steamy Bagel BELT)

I don’t necessary blame the Leafs brass for carrying on the shenanigans of the NHL injury reporting system these past few weeks – but I don’t condone the behaviour either. We fans are intelligent (or at least we’d like to think we are) and we know when we’re being duped. If you’re going to hold press scrums to announce injuries, either tell us or don’t tell us – if you don’t feel comfortable providing details then save your breath and spend the time working on the league’s worst penalty killing unit.

In the meantime – get well James.  Lord knows we could use both your upper, and your lower body between the pipes at the ACC.
Posted by Darren K at 7:55 PM

i wish he gets better!