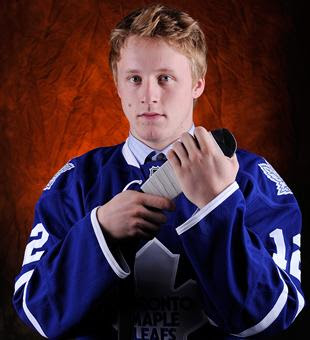 With the 5th overall selection in the 2012 NHL Entry Draft, the Toronto Maple Leafs took the player who most scouts believe has the highest offensive ceiling among defensemen.  While most of Leafs Nation was hoping for a forward in that slot, hearing "highest ceiling" in regard to one of our prospects is something most of us can get excited about.

After the initial disappointment of not getting a coveted centre and the subsequent acceptance/realization that Rielly is a player with a lot of potential, I felt a red-flag go off in my mind and at first I couldn't quite figure out what it was.  Then I started thinking about offensive defensemen lately and how often they've been able to replicate elite success with names like Ryan Whitney, Sheldon Souray, and Keith Yandle immediately springing to mind.  With a sinking feeling in my stomach, I decided to have a more detailed look at things.

Using Hockey Reference I decided to look at top-tier production from defensemen since 1995, defining 'top-tier' as 55 points or more in a single season.  In terms of raw numbers, there were 90 cases of defensemen meeting or exceeding this threshold.  9 of these seasons occurred pre-lockout, and 8 were post-lockout.  Pre-lockout there were an average of 4.88 defensemen who achieved these numbers each season while post-lockout the average increased to 5.75.

While the number of cases has increased post-lockout, longevity seems to be on the decline.  Of the 18 defensemen who had their first 55-point seasons post-lockout, only Dan Boyle, Brian Rafalski, Lubomir Visnovsky, and Mike Green have been able to accomplish the feat more than twice and each of them have done it 3 times.  Now obviously part of this can be attributed to opportunity -- Erik Karlsson and Drew Doughty will have plenty of chances to exceed the 55-point mark in coming years -- but we simply aren't seeing the consistency of performance among offensive defensemen that we saw from the '90s crop of Lidstrom, Leetch, Bourque, Blake, Zubov et al.  While occurrences have increased, year-in and year-out dominance from star defensemen appears to be on the decline.

Mom, Where do Goalies Come From?

Watching the draft on Friday night it was interesting to see how the myriad of hockey experts in the press room, on the floor, via satellite, online, could all have such varying predictions. Other than the consensus pick of Yakupov at #1 (or if you’re Brian Burke, Rielly at 1) pundits were at odds over the remaining players in the first round. A player like Filip Forsberg dropped inexplicably to the Capitals at 11, while Calgary’s Jay Feaster reached for Mark Jankowski at 21.
There was, however, one thing that all GMs, analysts, and fans alike seemed to agree on - Never, ever, ever select a goaltender early.
This is really fascinating. The NHL has been playing regular games since 1917, with most teams employing a scouting staff of over 12 people, and yet we collectively have no concrete system on how best to value young goaltenders. Repeatedly announcers cautioned us against  taking a goalie early, stating it as page one, rule one in the draft day handbook. To some degree they are right, given that goalies tend to develop at a slower pace then position players, but they were understating the fact that all 18 year olds come with considerable uncertainty.
With the JVR trade in the books (yay!) it appears Burke has turned his attention to our goaltending situation. He has stated on more than one occasion that he is comfortable beginning next year with the tandem of Ben Scrivens and James Reimer. With all the talk on draft day about the mystery surrounding goalie development, and success, we at BCP have been forced to ask the question – where exactly do goalies come from?
Unlike the proverbial birds and the bees, this seems to be a question that haunts a man long after a slightly awkward conversation with his father at the age of 13. We’ve decided to simplify it a bit and start our search in the American Hockey League.

Turns out every girl's favourite actor from 'Breaker High' is a pretty big Leafs fan. 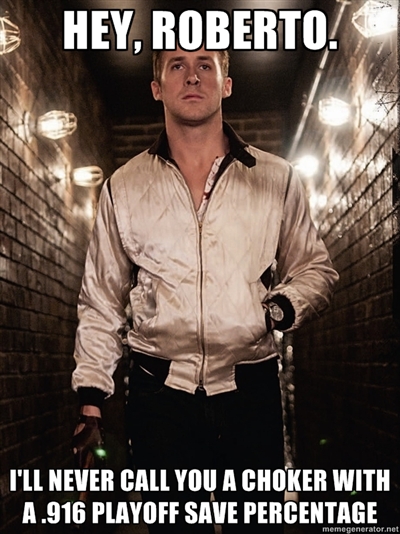 There's a certain amount of self-loathing that comes with being a Leafs fan these days.  I suppose it comes with the territory if your team has missed the playoffs as many times as we have, but nobody can create a self-deprecating meme quite like Leafs Nation.  The line being tossed around the internet lately is a formula:  In any given draft year, the number of quality players can be expressed as QP = (LP)-1 where QP represents the number of quality players and LP represents the slot where the Leafs will make their first selection.

In the eyes of many, this year is no different.  Many Leafs fans have adopted the forward-or-bust mantra for the draft and will be disappointed if the Leafs don't land one of Yakupov, Galchenyuk, Grigorenko, or Forsberg.  Is it a coincidence that there are four forwards and the Leafs' first pick is at five?

Heading into the draft, we've decided to have a look at the players taken with the 5th overall selection over a fifteen year period.  I think you'll find that the results aren't as bleak as you might expect.


I really don’t like San Jose Shark fans. Amazingly, this distaste has nothing to do with their obscenely warm seaside climate, the economic might of Silicon Valley, or the fact that they traded 3 spare parts for Joe Thornton. No, it has everything to do with the sickening waves of entitlement they push onto the rest of the league.
Spend 5 minutes talking to any Sharks fan, and they’ll invariably jump into some variation of “boo hoo, we have such a great core but can never win in the playoffs!” Try listening to that, first as a Leaf fan, and secondly as a student of even the most rudimentary mathematics. When only 16 out of 30 teams even make the playoffs each year, the perennial bridesmaids shouldn't get to whine.
Since 1997 the Sharks have only missed qualifying for the post season once, in 2002-2003. During that stretch they’ve compiled 6 divisional championships and one President's Trophy (2009). When you consider the changes throughout the league since '97, in and out of the dead puck era and through the lockout, the consistency shown by the Sharks is remarkable.
That’s why as a Leafs fan it’s painful listening to the San Jose media bemoan the accomplishments of Joe Thornton, Patrick Marleau, Dan Boyle, and other core players that have come and gone. I can imagine that for a sports athlete being unceremoniously labelled as a playoff “choker” is up there with tearing your ACL/MCL in terms of pain.
The interesting consequence of this regular season consistency is that fans are pushing the team and ownership towards moving a new direction and breaking up the core group. Players like Patrick Marleau and Joe Thornton have been absolute stalwarts in recent years, but of course are yet to get over the proverbial “hump”.

BCP Draft Series: Clarke MacArthur Is A Good Player But I'd Trade Him Anyway

In two seasons with the Toronto Maple Leafs, Clarke MacArthur has played 155 games and registered 105 points all while putting up very solid possession statistics.  He's a very respectable second line player and at a $3.25M cap hit, he's a bargain for a team looking to seriously contend next season.  Unfortunately for us, the Leafs are not that team.

The other day, I was asked if I would move MacArthur for a late first if the opportunity presented itself.  My initial reaction was 'probably not' but the more I thought about it, the more I was convinced that it might not be such a bad idea.

MacArthur is 27 which puts him more or less in the prime of his career.  He'll still be a good player in a couple years when the Leafs have hopefully sorted out their goaltending issues and the defense corps that Burke is so fond of moves from being high on potential to high on actual results.  When the Leafs are good, MacArthur will be too.

One of the problems, as I see it, is that he's in the final year of his deal and is a pending UFA.  Keeping a player into that final season of a contract carries with it the risk that the player will walk at the end of the year and you'll be left with nothing.  That's probably the worst case scenario.

Alternatively, it's possible that MacArthur re-signs with the Leafs.  What kind of money could MacArthur expect on an extension?  Well, David Jones fleeced the Avalanche out of $16M over 4 seasons while putting up worse numbers than MacArthur in every meaningful statistic.  It wouldn't surprise me to see MacArthur fall closer to Grabovski's $5.5M per season than Jones' $4M, especially if he splits this difference between 2010-11's production and 2011-12's.

I’ve been told on many occasions that 40 is the new 30. This seems to be rooted in the fact that people are living longer than ever -- 77ish, or so I’m told -- and, with more time on earth, we are allowed to extend our “youth”.
It’s hard to say whether this burgeoning adage applies only to single people who are looking for excuses to dress and act 10 years younger than they are or if it extends to the sporting world but either way, some of our favourite athletes from our youths have been looking rather spry of late.

It’s been fun to watch a number of athletes excel late into their 30s, and in some cases their 40s. A few examples spring immediately to mind; Sakic putting up 100 points in 2006 at the ripe old age of 37, Teemu Selanne finishing with a point per game last season at 40, or most recently Nicklas Lidstrom performing like a Norris candidate at 42.
The trend isn’t limited to only skaters, as goalies like Hasek, Belfour, Roy, and Joseph all enjoyed some of their best seasons after the age of 35 (of course I’m ignoring the bitter memory of Cujo's final season in T.O – it still hurts).
The question that has been batted around Toronto sports talk radio is this: Should the Leafs overpay to bring in Martin Brodeur on a 1 or 2 year deal?

With the NHL Draft a little over two weeks away, Darren and I have decided to roll up our sleeves and put together some draft-related goodies for fans to mull over.

While we haven't formally discussed the form that these posts will take, you can expect to see some draft analysis using past draft results, some prospect info on guys who fall within the Leafs' draft slots, and likely a considerable amount of roster-bation.

With that out of the way, today we want to focus on assets that may be available on Draft day.  While we're not in the rumour-making business, there's no harm in connecting the dots on some of the offseason scuttlebutt.


Probably the name most often linked with the Toronto Maple Leafs is that of Canucks' goaltender, Roberto Luongo.  Given the Leafs' need in net, Nonis' comments that the team is hoping to find a veteran goalie to insulate Reimer/Scrivens, and Luongo's trade request (or whatever Gillis is calling it this week), it's unsurprising that Luongo would be linked to Toronto.  His decade-long contract, which was league-approved, has the kind of declining value that Burke has spoken out against in the past but the fact that it has already been approved by the league may give him the excuse he needs to justify it as somehow beyond the purview of his prior objections.