Brad Richards - Is He the Answer? 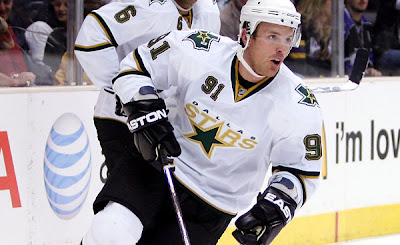 Today at work I overheard some interesting water cooler Leafs talk (ok we don’t actually have a water cooler – it’s a coffee station – water cooler banter just sounds better). Two guys were going on and on about how good Brad Richards would look wearing the beautiful colors of the blue and white.

The Dallas Stars' 1st line center, Richards is currently playing out the final year of his massive contract and is garnering interest from a number of teams around the league. Normally a player of his calibre would be a candidate for a long term extension; however ownership woes in Big D will likely result in Nieuwendyk sending Richards out of town at the deadline for a package of picks and prospects.

While the thought of a slick, point per game, proven 1st center wearing a Leafs uniform may have you salivating as a fan – take a moment, and look at the facts:

1. We like to think hockey players are “pure” good guys who just love playing hockey for the joy of the game. Fact is, they're human and money, to a degree, is a serious motivating factor. Richards played both last year (91 points in 2009-10) and this season with the knowledge he underperformed after getting a dream deal in 2006 from the Lightning (5 years, 39 million). The contract he signs this summer will likely be the last big pay day of his career and he is playing like a man possessed. If you look closely enough you can almost see the green dollar signs in his eyes light up after every goal.

2. Dallas is a cash strapped team, meaning they have no interest in players with mid to large contracts. Any deal involving Richards is going to come down to draft picks and prospects. The Leafs would almost certainly have to lose a future first rounder and one of Luke Schenn or Nazem Kadri. As fans we have lamented for the past 5 years just how utterly bare the team's cupboards are when it comes to prospects – we simply can’t afford to trade away what few we have.

3. Brad Richards is 30 years old (31 in May). The NHL is not the NFL, in that a superstar player’s performance doesn’t necessarily drop off a cliff in their 3rd decade of life. However, it’s rare that a player is able to sustain an “elite” status past the age of 33. Which means Richard likely has 2 more seasons after this one as a top, front line center. He will be looking for a 5-6 year deal this offseason in the range of 6-7million per season. If all goes to plan (fingers crossed) the Leafs will be a contending team in 2-3 years time – just as Richards performance falls off significantly. Instead of being a positive part of our future, he would become an overpaid veteran with a contract that prevents management from maintaining the flexibility so essential in the cap era.

Brad Richards is a fantastic hockey player, and if the Maple Leafs were a player or two from contention I would be chairing the welcoming committee once he arrived in town. But we aren’t a contending team, at least not yet, and a 30 year old once upon a time superstar who loves the sweet smell of a contract year is NOT the answer to our woes. Let's watch and laugh as a team desperate for offence (Ottawa Senators anyone?) overpays for Richards at the deadline and saddles themselves with the albatross that is a 7 year 68 million dollar contract extension.

What if we could sign him in the offseason to the type of deal you're describing?

If we didn't have to part with any assets to land him, would you like to have him at that price?

As I finish writing this Richards just converted on a nice pass from Ott..... I was right about the dollar signs though

It really depends on what kind of money he is looking for. I expect him to ask for over 6 million. If he is willing to take a deal with a cap hit around 5 million I'd be inclined to think about it. But even then, what kind of term is he looking for? I cant imagine he'll settle for a 4-5 year deal given the Kovalchuk, Zetterberg and Hossa deals that have been inked of late.

I was reading Richards is looking for a seven year deal. I can imagine it being NMC as well. Can't see Burke doing it.

Besides, Burke has the whole season to assess Kadri. He may turn out to be the elite play-making forward needed for Kessel (and others for that matter).