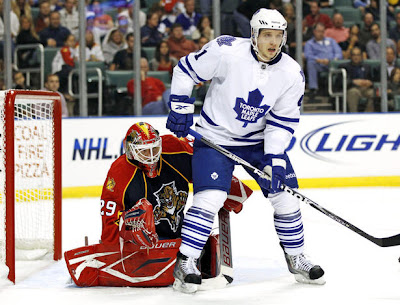 With the season a quarter done we here at BCP feel it’s time to hand out some report cards. As a Maple Leafs fan the ride has been much like a roller coaster these first few weeks. From the hot start, to franchise long losing streak, to the recent bounce back (led by my guy Nazem Kadri) – it’s been anything but boring.

Some players have greatly exceeded our expectations, while others have struggled to produce. Below are the early season report cards for some notable Leafs.

Phil Kessel – The undisputed “best player” on the team has been average this season, with 9 goals and 4 assists through 20 games. In the early going he looked fresh and rejuvenated after a healthy offseason of training. However, of late he doesn’t seem to have that extra gear. At 23, fatigue is certainly not a factor – I wonder if Ron Wilson is pushing the wrong buttons with Phil. Regardless, a 53 point pace simply isn’t good enough for our top sniper. Kessel will need to focus on driving the net to get a few more “garbage” goals, as goalies have adjusted to better defend against his patented wrist shot from mid range.

Nazem Kadri – Dubbed the “saviour” by some, our best prospect has been surprisingly effective in his first few games with the big club. Compiling 4 assists through 5 games, Kadri has not looked out of place. Generally making good decisions with the puck and creating space with deadly changes of pace, he has been a boost to an offense that was sorely lacking. Better yet, Wilson has shown confidence in the youngster giving him around 19 minutes of ice time each game. While he still has a long way to go before becoming a bonafide #1 center, Leaf fans must be happy with the progress so far. Here is hoping he can build on the fine start, and maybe shoot the puck a tad more.

Dion Phaneuf – Prior to the fluke laceration injury he suffered to his thigh Dion was getting mixed reviews from Leaf fans. While some have praised his ability to generate chances on the PP and establish a physical presence in the defensive zone, others have criticized his lack of foot speed and poor decision making. When fully engaged he still has the ability to be a top defenseman in this league. I’m going to assume we haven’t seen the best from Phaneuf quite yet, and allow his slow start through 11 games stand as an aberration – take a mulligan Dion.

Jonas Gustavsson – The monster has been nothing short of spectacular in the early going this season. Sporting a tidy 2.30 goals against average and .922 save percentage he has single handedly kept the Buds in a number of games. His win total sits at a lowly 3, but that has more to do with the Leafs' anaemic offense than with Gustavsson’s play. Blessed with elite size and lateral movement, there were times last year when Jonas would overcommit on rebounds and during scrambles in front of the net. This year, the Monster looks more poised between the pipes, letting plays develop in front of him before reacting. Is he the franchise goalie of the future? Maybe – only time will tell, but it’s one heck of a start.

Nikolai Kulemin – He doesn’t get much love in the media, or from fans, but he is undoubtedly the Leafs' most effective player. His 13 points through 20 games don’t tell the whole story with Nikolai, as he excels at all aspects of the game. The teams most defensively responsible forward, he rarely looses a puck battle along the boards and works tirelessly when in pursuit, keeping his feet moving at all times. It’s rare a player can fit seamlessly into the line-up on any of the top 3 lines – but Kulemin can. He is akin to a utility player in baseball; he simply does anything and everything for this hockey club.

Tyler Bozak – As it turns out there is a significant difference between the NCAA and the NHL (who would’ve thunk it). The 25 year old has struggled mightily this season, amassing only 6 points through 20 games despite seeing close to 20 minutes of ice time each night. Last year, when Tyler was at his best he was physically engaged each night, getting involved on the fore-check and working hard to win the puck. This year his game has crept to the periphery as he attempts to set up line mates for the perfect passing play. It’s unlikely he’ll ever be a first line center at the pro level, but he has the vision and playmaking abilities to succeed on the second line. He will need to turn things around shortly though, or it could be a lost season for Mr.Bozak.