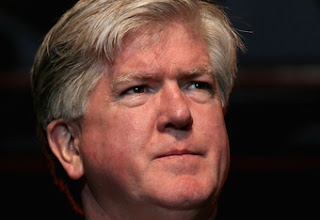 Brian Burke is a genius and anyone who says otherwise is a communist or a Habs fan or both. His moves at the trade deadline improved the team's asset base exponentially and perhaps more importantly set the team's salary structure in a way that will permit us to be competitive in a reasonable amount of time. Much attention has been paid to the Phaneuf deal but I feel that the deal for Giguere was the one that will truly launch us forward.

In other words - a hell of a lot more than what's available this offseason.

According to 'Cap Geek' we're set to have around $22 million in cap space that offseason (a number that is clearly deceiving given how few players we have on the roster at that point). With Gustavsson and Rynnas in net, our roster will look something like this:


Let's fill in some blanks.

Using the magic of the internet, I have made Jeff Finger and his contract disappear! I assume Brian Burke will, by some means, do the same. What we're left with are two top 6 forward spaces that need filling and $11 million in cap space to do it (assuming the cap remains relatively constant).

Backes seems like a no-brainer. He's the kind of player Burke loves and his connection to the US national team is not to be overlooked. Also, depending on the year he has next season, he may be a very reasonable cap hit. Unfortunately, signing him will also likely mean we can say goodbye to any of the RFAs (who, other than Carter and Seabrook, weren't likely going anywhere anyway - but hey, it's fun to dream).

What would remain at that point as far as high-end talent goes are mostly centers but a guy like Simon Gagne might fit nicely under the cap and into the lineup. He's a bit older, but let's face it, with a roster as young as the one that's projected above, we could probably use a veteran presence. Laich is also probably in our price range but he's a natural center so somebody would have to play out of position.

Is that the way to do it? Use the $11ish million bucks on two solid top 6 guys? Or do we go high-end talent and break the bank on a guy like Semin or Thornton?

Either way, we're starting to see the makings of a playoff roster and depending on the development of our younger guys, maybe more.
Posted by Curt S at 2:01 PM

I'm going to assume that at minimum at least two of DiDomenico, Stalberg, Hanson, Caputi, Hayes, Champagne, D'Amigo, Holzer, Slaney, Blacker, Aulie or Irwin solidify a position on this team before July 2011 but my guess is we'll see at least 4 of them on the roster this season. There is still a lot of work to do in figuring out what Toronto has right now, I think it's a task and a half to start guessing what the line-up will be end of next year and which UFA's Burke might target.

I would also assume Burke signs at least one forward out of this summers UFA market (fingers crossed it's Aaron Asham), and I'll bet he trades Thomas Kaberle for a top-6 forward and if that fails he might extend his contract.

I would wager that if you do this exercise again in September it will have changed. By December it will be completely different!

I couldn't agree more. This exercise was done in a vaccuum and assumes that what we get back for Kaberle are draft picks or non-NHL ready prospects (which isn't likely). It's also tough to say who will re-sign with their teams before getting to free-agency and how our young players will develop.

This was a complete shot in the dark - I was just curious at who was potentially available and what the likely cap implications are for our team during that offseason (which in my opinion will be the most important of Burke's tenure).

I am of the opinion that Burke is a lot smarter than people think! Theres a reason he and nonis are stocking the cupboards with talent -- he's going to parlay the prospects into some solid players and the lineup is not going to look like what you have up there for either year

Beauch or Komi are goners this summer for some help up front. BOOK IT!

GMs don't typically trade guys that are only one year into their free agent contracts. The reasoning is that doing so can sometimes act as a deterent to future free agents (ie. Do I really want to sign here and then possibly get traded to Edmonton?).

My guess is that both guys are still Leafs until at least next summer. At that point, who knows.

I dont know why noone is talking about this, there is the potential for a big deal to be worked out with carolina over the draft, there Defence is crap at best and 2 are ufa's. so hows this deal, Kaberle and Grabo (or someone like him? Stalberg?) for Carolina's first round pick and a prospect or 4/5 rounder? its a good deal for both teams because carolina is young and has a lot of developing talent and can forgo the draft pick cuz of the void kabrele would fill for them.

Carolina said that they're in a re-build so I doubt that they'd deal their first-rounder. Also, Burke has stated that the price for Kaberle alone is a first and a prospect or a player that can play in the top-six now.

Kaberle would probably be a better fit on a team that's a bit closer to winning than Carolina is.

Don't see the Canes moving their pick. That said, I have no idea where Kaberle ends up. Check out Maple Stirup's blog for a good post on Boston being a possible location with a centerman coming back our way.

I also think kabby is on his way to Boston for a centerman but not Savard.