The comparisons to the 1942 Red Wings were inevitable as Boston managed to complete their ESPN poll-winning collapse, losing to the Flyers in seven games. As a result, the B's will now have to suffer the indignity of being the only NHL team to cough up not only a 3-0 lead in the series, but also a 3-0 lead in the deciding game.

But how bad was the Bruins collapse? On the face of it - horrible. They will have to keep the windows of the TD Banknorth Garden open until at least mid-September in order to air out the stench of the Bruins' failure. But taken as the sum of its parts, there's been worse in the wide world of sports. In fact, there has been worse in the same decade. I present for your consideration two incidents that should be able to provide some solace to the B's and their fans: Boston Red Sox fans were preparing for an 86th consecutive year of playoff disappointment heading into Game 4 of the 2004 ALCS. The night before, Sox fans had watched in horror as the New York Yankees, their hated rival, thumped the hapless BoSox 19-8 to take a seemingly insurmountable 3-0 series lead - a deficit no team in MLB history had ever been able to overcome. The Yankees were up 4-3 in the bottom of the ninth inning, just three outs away from yet another trip to the World Series. Improbably, the best closer in baseball, Mariano Rivera, gave up a run to tie the score and send the game into extra innings. Finally, in the 12th inning, Boston DH David Ortiz hit his famous walk-off home run, giving Boston a faint hope. Ortiz repeated his heroics in Game 5, batting in another walk-off run in extra innings to win a close-fought game. With the series heading back to New York for Game 6, The Yanks' vaunted offense fizzled with Sox starter Curt Schilling, pitching on a sutured ankle, allowing only one run in seven innings on the way to helping the Sox knot the series at 3-3. Finally, in Game 7, an inspired Red Sox team leapt out to a huge lead early on, eventually winning the game 10-3, thus completing the most storied comeback in MLB history and crowning the Yankees with the humiliating distinction of being the only team in MLB history to ever lose a series after building a 3-0 lead - to the Red Sox no less. To this day, mention of the '04 ALCS inspires near-transcendental level of joy in the hearts Sox fans and elicits vitriolic defensiveness from Yankees fans in order to hide their soul-crushing shame...if anyone associated with the Yankees had a soul. Which of course they do not. 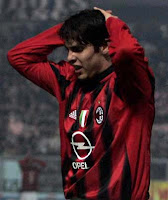 In the '05 Champions League final, a favoured Italian AC Milan squad, fuelled by spectacular performances from star players Hernan Crespo and Andriy Shevchenko, was leading English club Liverpool FC by a score of 3-0 at halftime. Like the Bruins, AC Milan managed to squander their three goal lead, only in more spectacular fashion - Liverpool scored three times in only six minutes, tying the game only fifteen minutes into the second half, ultimately winning the game in penalty kicks when three of AC Milan's five shooters failed to score. To fully appreciate the staggering magnitude of AC Milan's choke, you need to remember that this is soccer we're talking about ('football' if you're a visor-wearing European). A three goal lead in soccer is like a six goal lead in hockey - the Canadian Olympic curling team could plausibly defend a three goal lead for the last half of a soccer game. Finally, unlike in hockey, over 80% of penalty shots taken in professional soccer result in a goal. AC Milan missed THREE TIMES in five attempts to complete their epic collapse. The math speaks for itself (OK Flyers fans I'll do it for you - that's only a 40% conversion rate).