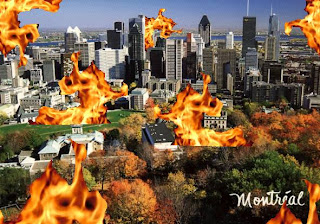 Following tonight's defeat at the hands of the Philadelphia Flyers, Canadiens fans took to the streets of Montreal in a fit of rage.

"I just can't believe it," said one fan, "I really thought Gomez would be the difference this year."

The scene in the city could only be described as apocalyptic as buildings were burned, cars overturned and puppies kicked. Store owners flocked to the street in an effort to salvage their property. "Back in my day it was all looting and vandalism," uttered one vendor, "this I can understand. Lighting things on fire? That's taking things too far."

The mob claimed that they never meant to burn anything and insisted that the fires were started as Carey Price discarded the thirty-five cigarettes he was smoking at the time. Investigations are ongoing.
Posted by Curt S at 11:22 PM