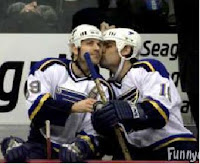 So Darren put together a list of guys he loves. Trust me, the list was not exhaustive (just wait until you hear him talk about Anze Kopitar). I have to admit, I have an affinity for lists that borders on obsession so when one of my colleagues puts together a list I like and don't totally agree with, I'm going to copy his idea. Call me unoriginal.

To reiterate, the bro-mance we're talking about here isn't about being the 'best' or even necessarily about being my favorite player. It's about that certain je ne sais quoi that draws you to certain guys. With that in mind, here are my top five;

5) Shea Weber - I've always liked defensemen. Add that to my normative bias. I played the position as a kid and I've always had a thing for the more under-appreciated elements of the game. And who are more under-appreciated than the Nashville Predators? Shea Weber makes the list for being a bruising defenseman that put a slapshot through the freaking net. Not even Laperriere is putting his face in front of that!

4) Mike Richards - Bias alert #2 - Mike Richards is on my fantasy keeper team. But seriously, I feel like he'd be on here anyway. He kills penalties, scores goals, fights, blocks shots. The guy does it all. He's shutdown Alex Ovechkin in the World Juniors, the Playoffs and most recently the Olympics. Not to mention, he seems to do alright with the ladies. He can be my wingman (he plays center) any day.

3) Henrik Lundqvist - Also, on my keeper team. The guy is so consistent though, and very likeable. If he plays poorly then he says that he played poorly and I like guys that take that kind of ownership. He's a snazzy dresser and he's dating a babe (more on this later).

2) Dion Phaneuf - Soon-to-be Captain of the greatest franchise in professional sports, Dion Phaneuf oozes bro-mance. From his gorgeous long time girlfriend, to his thunderous hits and his devastating slapshot the guy has all the tools. He fights, he won a World Junior gold medal and some day in the not-too-distant future he will be responsible for the death of Sean Avery. What's not to like?

1) Drew Doughty - Yeah, I know, I know, another defenseman. Guess what? He's on my fantasy team too. But how can you object? He's a smooth skater and an Olympic gold medalist with a track record of raising his game when his country calls on him. And since his country is also my country, that's a good thing. I've always had a bit of a thing for young and exciting teams and the Kings certainly fit that bill (Dustin Brown almost made the list). Just how Canadian is this guy? His nickname used to be Dough-nuts. Sure, it's because he was overweight but heck, it's good to see a former fat guy make it in the big world.
Posted by Curt S at 12:14 PM