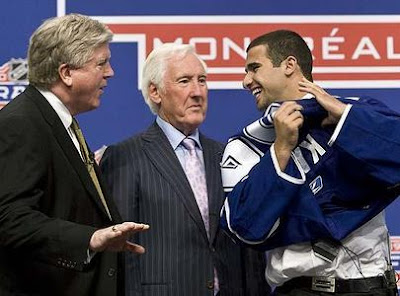 There are few things I remember more vividly than the events that transpired on June 26th, 2009. I was at my then girlfriend’s house trying to convince her that watching the new Sex and City movie on DVD was not nearly as important as watching Leafs' future unfold in what was certain to be a pivotal moment in the looming rebuild.

We argued a bit, and she begrudgingly went upstairs, allowing me to the watch the draft on the couch – which is subsequently where I slept. I did, sadly, see Sex and City later that week – I’ll never understand why Carrie took Big back, leaving her at the altar, proving that he wasn’t the man she had built him up to be throughout the series. Sigh, but I digress...

I called up Curt S, who was then only known as “Curt”. We talked over our predictions as to how the draft would transpire, with both of use agreeing that the odds of Duchene, Tavares , Hedman, or Kane slipping all the way down to 7 (when the Leafs first picked) were slim to none. Our goal, like that of most of Leaf Nation, was to somehow trade up and choose Brayden Schenn, uniting him with older brother Luke.

At the close of the 4th pick we had sadly missed out on the top tier of draftees, then Schenn went to the Los Angeles Kings at 5. As pick 7 approached it was agreed unanimously that Magnus Parjavi-Svensson (then known as Svensson-Pajaarvi) from Sweden was the best option left on the board. His size and speed would be a great addition to our top 9, and many scouts had compared him (unfairly) to a young Peter Forsberg.

Brian Burke stepped up to the mic, confident as ever, to announce Toronto’s 1st round selection. He went on to choose Nazem Kadri of the London Knights. I suddenly heard a loud crash on the other end of the phone, and it went silent. I tried calling back a couple times, and eventually got through to Curt. He has thrown his cell phone in disgust against a nearby wall, and needed a few moments to collect himself – he really wanted Magnus – I think it was around this time we decided to start a blog.


Kadri was sold to us as a future top line center, possessing deft hands, a natural ‘edge’ and competitiveness that more than compensated for what he lacked in stature. Ron Wilson famously said that Nazem would one day be a 100 point player in the NHL – the obvious joke now being if he was referring to Kadri's ‘career’ total. The offensive stats from his years in the OHL were sublime, and had many a Leaf fans penciling him in on the top line for a decade to come.

The issue with Kadri is twofold; stemming from both his inability to find a role in Leafs' everyday line-up, and the draft class in which he was taken.

The crop of players who have emerged from the 2009 class is a virtual who’s who of young stars in the league. The players below were taken before Kadri at 7:


It’s hard to avoid the comparisons of Nazem to the players listed above. With Tavares, Hedman, Duchene, and Kane all making significant contributions to their teams.
A look at some of the notable players taken after 7 reveals that there was significant value to be had later in the draft. This raises the obvious question; in hindsight, was Kadri overvalued by Burke and his scouts?

Shootouts have allowed Kadri to show off his fantastic puck handling ability. There are few if any on the team that can match his level of pure skill. Unfortunately, this high skill hasn’t resulted in production at even strength or the power play.

Kadri has looked out of place in the NHL game, with defensemen able to push him off the puck far too easily, taking advantage of his 185 pound frame. The flashes of offensive flare have been few and far between. Often he’ll group together one or two productive shifts, generating chances in the offensive zone, only to disappear for the remainder of the game. Despite mixing and matching of linemates, he’s never truly gotten comfortable in the top 9. The result being multiple call ups and demotions to the Marlies.

It’s my opinion that year 3 of a players development is when he has to demonstrate he has the ability to be a pro. It just doesn’t seem to be there with Nazem.  For whatever the reason, Toronto hasn’t been a fit for him or his style of game.

Having said this, he certainly has value as a trade chip, given his skill set and draft pedigree. The time has come to package him in a trade for an asset that can help us in the here and now. Allowing another team to try and figure what exactly Nazem needs to be a successful NHLer. The time has come to call him a bust in Toronto.

Curt runs our twitter account @bcphockeyblog but he loves telling me all of the awful shit you guys have to say about me.  So, Kadri lovers, give me your worst!
Posted by Darren K at 8:53 PM

It seems your posting on Kadri and mine comparing him to Kyle Turris over at the BoO are getting some rage on PPP.

With all due respect, comparing today's Turris with today's Kadri doesn't make sense. If we look at Turris three years after he was drafted, he didn't play a single game in the NHL and was less than a PPG player in the AHL. Kadri has split time and is PPG in the AHL despite the disruption.

My post has nothing to do with projections. It was essentially responsive to a bunch of Leaf fans saying Kadri was the top pick from his draft year, is better than roster guys on other teams (Ottawa) and the like.

I was just comparing 'now' to 'now' as the contention was Kadri was better. It's impossible to compare players at different stages.

We could go Cowen v. Kadri given draft year, age, etc. for a direct comparison but the positional differences get in the way.

Yeah, if you're comparing today to today then Turris is clearly the more effective player but the organizational expectation of Kadri is not that he should be playing the role Turris is on the Sens right now.

If someone said that Kadri was some elite wunderkind now, then they were off their rocker, but he has a lot of room to grow. Next year will be a telling one for Kadri

Well, that's what my whole thread is about. One of the other contributors said Kadri was a sure thing Calder Trophy winner, but put in games-played conditions in a wager we had.

But yes, I'm looking forward to Kadri's AHL performance next year for a true evaluation :)

I'd be shocked if Kadri didn't surpass the glowing 25 point season that Turris laid four years after he was drafted.

It's ok to love your guy but let's not get crazy here.

I dig how Turris plays; I wasnt' getting crazy. I didn't declare him an all-star or say he was the best player ever. The comparable with Kadri comes from the Leaf love of the Toronto Marlies' Kadri and declarations of his Calder Trophy abilities. In particular, a BoO Leaf contributor thinks Kadri is a sure thing all-star; I was simply reacting with a reasonable comparison. Maybe I should've compared Zack Smith instead.

And I read on PPP of your distaste for my filling your comments with Turris references. Sorry for the discussion. I'll stop.

@THM
I've got no problem with you posting -- I love having the debate. All I said was if you're going to love Turris and say Kadri will be developing in the AHL that you should look at where Turris was at that stage of his career.

Truthfully, I love arguing with Sens fans as much as I love playing their team in the playoffs. :)

Wilson said he'd be a 100 pt player in the OHL once they send him back to mature as a player, NOT in the NHL...

I'm not the biggest Kadri fan... but I think there are a few things that should also be considered.

So he's 21 years old now. The last two seasons when he came to the NHL he obviously was not ready. We saw him come up for the those 4-8 game stretches and more or less crap the bed. To me, that's OK. It's okay because he's young and not everyone is going to come in and pick up the game right off the hop.

IMO this year should have been the first year for him to prove himself, and maybe he still will... but look at what happened. All our other prospects were given a chance and for the most part played much better. But take a look at their ages of all these new prospects that we've been looking at this year:

matt frattin: 24 years old (playing in USA up to last year)
Joe Colborne: 22 years old (and a january bday whereas Kadri is October)
Joey Crabb: 28 (not the greatest example but still much older)

I just think maybe your expectations should be reconsidered. I know the NHL is turning into "a kids game" in terms of the younger crew coming in, but if you don't have the body size and the maturity, for which Kadri had neither, then it means a little more patience for that type of player. It's not that kadri hasn't found his place on the leafs, there a just a lot of other players who are a bit older, a bit bigger, and a bit wiser who are getting their chance and running with it.

Finally, I think NOW is the time that we really start to evaluate him. I think he had these huge expectations (because he's so cocky) that he would just waltz on to the team this year and that didn't happen. Other players showed the grit that he refused to provide and for that reason they stayed up. It wasn't until December-ish or so that Kadri came up and I thought he looked MUCH better when he got the chance. I love the internal competition that this time is creating.

Okay, that's it. Last comment though, all these things being said I still think Kadri is great trade material. I think he's lucrative to other teams and we can get something good for him because we have a lot of other prospects who are fitting into the New look leafs

Hindsight is 20/20, but I'd say you have egg on your face, after Kadri's performance this season. I suppose a lot of his failings early on could have been attributed to his maturity and the fact that Ron Wilson truly was a lousy coach (especially when it came to young players).

Well too bad you are not coming out and saying you were wrong but sir you are. Kadri will be a 100 point centre and the initial reports about him were all correct. The coaching stuff of Ron wilson was the problem, not the drafting.