Mats Sundin & The Shadow of 93 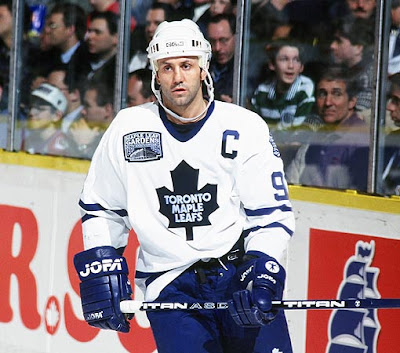 My usual weeknight routine is as follows – I arrive home around 6pm from work, quickly plop down in my 1978 La-Z-Boy recliner and try to catch the end of Pardon the Interruption on TSN. Around 6:15pm I attempt to make dinner, which usually results in pizza pockets and a slice of wonder bread – I have a sneaking suspicion certain key food groups are missing from that equation.

On any normal night, I’d finish eating and after begrudgingly doing some dishes and maybe a load of laundry eventually make my way back to the lazy boy and watch whatever sporting event happens to be on. What was different about Wednesday night was that the Leafs were playing Calgary, but since they’re out on the West coast the game didn’t start until 10pm.

With no Leaf game on, I began to meander through the 120 channels the friendly people at Rogers afford me, only 6 of which I ever watch – MTV, TSN, Sportsnet, Leafs TV, the Score, and TLC (I like home reno shows, okay?).

I ended up pausing on Leafs TV. There was a semi-press conference being broadcasted wherein a nondescript Leafs TV host was interviewing Mats Sundin in front of what appeared to be Real Sports Bar in Toronto, taking questions intermittently from a sea of onlookers proudly donning their blue and white #13 Maple Leaf jerseys.

I watched for about 15 minutes. Mats was his usual affable self, deflecting any questions about his career accomplishments, crediting them to the help and support of past teammates (cause you just know he wouldn’t have had 1,349 points had he not been flanked by Jonas Hoglund). There was the usual string of questions: how did it feel to win the Gold Medal with Sweden at the 2006 Olympics? What was your favourite career accomplishment? And so on...

The crowd was truly a Torontonian mosaic. With people from all cultural backgrounds and walks of life. There were teenagers, fathers and sons, hockey moms, all of them united in their admiration for a hockey player who had proudly worn the maple leaf for nearly 12 seasons. You could sense a legitimate bond between Mats and the growing crowd. He was their captain, and for many their hero and he had returned home to be honoured, and to honour the city he had represented for so long.

Here’s the problem I have. And it’s kind of a big problem for a guy to have, especially when said guy claims to have been a Leaf fan his entire life, with a love of the team passed on through generation after generation.

I felt an overwhelming sense of indifference.

While watching Mats Sundin answer questions from adoring fans outside of the hockey coliseum in which he battled so mightily for over a decade I felt indifferent. The captain of my favourite hockey team, the one that I had watched since the age of 4 evoked a relatively controlled emotional response. It was the same feeling I had during his jersey honouring on Saturday night against Montreal. I was happy for Mats, I just didn't feel the the surge of emotion I should have when watching one of the teams all time greats number rise poetically to the ceiling.

Now you’re probably just thinking I’m just a jerk, or maybe I’m a not a real fan, maybe I only care about the Leafs for the entertainment value, for the spectacle of it all. Maybe I’m no better than the Armani Army that comprises the lower bowl of the ACC and who can never seem to make it back to their seats after an intermission.

But I don’t think that’s it. I believe that I am a Leafs fan, and a devoted one at that. No, I think my apathy towards Mats Sundin and everything that he meant, or didn’t mean to the franchise can be traced back to one man – Doug Gilmour.

During the 1993 playoffs I was 6 years old. My first memory as a human being was sitting on my inflatable Mickey Mouse chair in the family room watching Toronto and St.Louis in round 2 of the playoffs when Gilmour faked right, and eventually came around the left side of the net to sneak in a wrap around on Curtis Joseph.

My family was crazy for Doug Gilmour. We absolutely loved him; my Dad bought me mini sticks with Gilmour’s #93, which I would use while wearing my #93 Leafs jersey, while playing mini sticks in the basement, and pretending to be Doug Gilmour.

Gilmour was everything the Leafs fan base was craving after a woeful run in the 1980s where almost nothing of note took place. He was an incredibly tough, gutsy Canadian boy, possessing the skills of a gifted playmaker, but the heart of true solider. His nickname of “Killer” has gone down in Leaf lore. It embodied everything that he was -- a hockey player willing to do whatever it would take to win. You didn’t have to question whether Gilmour was giving it his all each and every night; all you had to do was watch. Every shift was a full blown explosion of his competitive fire, he bruised and bled for this city and its fans – and we loved him for it.

It’s similar to how I felt after seeing the movie Inception.  I knew I would never fully appreciate another suspense thriller again. My perception of the genre had been forever altered. Inception, had in a way, ruined me. I know it’s now cliché to say that it was a ‘mind blowing’ transformative experience that literally turned the movie going experience on its head – but you know what, it kind of was. I saw it in theatres with my then-roommate and halfway through I turned to him and said, “I can’t take any more, my head is hurting”. It was around the time Leo and his band of dream explorers moved into the 3rd level of a person’s subconscious, while simultaneously impacting the 2 earlier levels of dreamland, and all the while sitting on a plane in the real world. The movie was so beautifully crafted and executed by Director Christopher Nolan that I can’t imagine ever enjoying a movie going experience in that way again. Inception changed movies in the way Dougie changed Toronto.

It’s because of who Gilmour was, and what he meant, that Toronto fans haven’t yet, and may never again truly embrace a Leaf leader. Many of us never really came to love Mats Sundin.  For all the goals, the highlights, the playoff successes, a part of our collective psyche has always hearkened back to Dougie.

Gilmour’s Leafs went to back-to-back conference finals in 1993 and 1994, bowing out in the former to Gretzky's infamous high stick, and in the latter to a young Russian rocket. What’s perplexing, and often lost on us Leaf fans, is that Mats captained the team to 2 conference finals, against the Sabres in 1999 and the Cinderella story Hurricanes in 2001. Had it not been for a young Dominik Hasek and Rod Brind'Amour, Sundin might very well have been captain of the Leaf team that ended the 40-year curse. We’d be naming street corners after him, he’d be doing Ford commercials, and likely be part owner of a successful chain of Mats' “Backhand” Bar and Grill.

Instead, he’s just a former Captain; a footnote in the annals of Leaf history. His number now hangs proudly in the rafters of the ACC, but his memory remains tucked away in the darkest parts of our hearts. We loved him, but we never really loved him, ya’ know?

As a Leaf fan, you always think of the ‘what if’ moments. What if Harold Ballard hadn’t forced Sittler and McDonald out of Toronto against their will? What if we’d somehow made it past Gretzky and the Kings and beaten the Canadians in a classic Stanley Cup Finals? What if Sundin, McCabe, Tucker, and Kaberle all unanimously agreed to waive their no trade clauses?

The biggest ‘what if’ I’m feeling right now is 'what if we had embraced #13 the way he embraced us?' Mats Sundin was, by all objective measures, a great hockey player but he had the misfortune of playing in the shadow of the most beloved Toronto Maple Leaf of all time. We spent the last 15 years wishing Mats Sundin was Doug Gilmour, but part of me thinks we might spend the next 15 years wishing he was still here.
Posted by Darren K at 10:47 PM