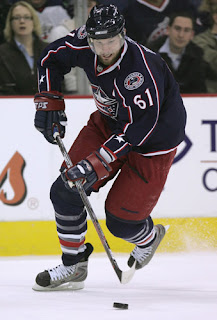 Ah yes kids – as your parents probably taught you (at least if they were good parents) there are two sides to every story in life. That holds true in fantasy GMs opinion of Columbus “power” winger Rick Nash.

Many pundits will point out that Nash has never truly achieved “superstar” status – and they are probably right. But that doesn’t mean he isn’t a valuable fantasy commodity now, and for years to come.

It’s a known fact that in fantasy hockey that wingers are gold. Because of the skill set generally associated with the position, and the increased puck possession at even strength and the power play – centers generally accumulate points much easier than wingers. As a result, the pool of star wingers is considerably lower than that of centers. Logically, this puts an increased importance on having high quality wingers, as they are more difficult to replace.

Position scarcity is an important thing to consider when looking specifically at Rick Nash. Yes 67 and 79 points over the last 2 seasons doesn’t seem all that impressive when you look purely at the point totals. However, when you dig deeper at Rick Nash’s numbers in the context of other wingers we see an entirely different story.

In Yahoo’s standard format rankings for 2008-2009 and 2009-2010 Nash was ranked 11th and 16th. In other words, in a 10 team league, Nash would be a mid to high end #2 winger on your team. Considering that you would likely have 6-8 wingers on your team having a solid #2 option is very important. Is a guy really that OVERRATED when he is consistently ranked in the top 15 wingers each season?

One of our fellow writers also pointed out that Nash has never reached his full potential. While some see this as a negative, I see it as a positive. Yes he is only a top 15 winger right now, but given that his team is only now starting to develop and that he may finally have a talented center in the maturing Brassard – the sky is the limit.

Additionally, if we can agree based on the facts that Nash is a top 15 winger (which I see as impossible to argue since he has proven it year in and year out) then we need to also consider his age. Looking at the wingers consistently ranked above Nash (Iginla, Marleau, St.louis, D. Sedin) many are also considerably older than him. In a keeper league, where fantasy GMs need to be mindful of age, it’s not crazy to think of Nash as a top 10 winger, given his age, proven numbers, and potential team and individual growth.

So with the above facts – is Rick Nash, a potential top 10 winger at age 25, being taken 22nd overall in a keeper league really that absurd? Assuming the 22nd pick falls in the 3rd round a GM would be able to get an elite superstar in the 1st round – a starting goalie in the 2nd – and a solid young winger (Nash) in the 3rd.

Sometimes in fantasy we have a tendency to judge players based on what we hoped they would become. No Nash will probably never be the 90+ point superstar we all envisioned as recently as 3 or 4 seasons ago. But to overlook his true fantasy value based on the unrealistic expectations you placed on him would be downright foolish.

Do yourself a favour this fantasy season, if it’s the 3rd round and you’re staring at Rick Nash on the board – draft with confidence.
Posted by Darren K at 9:28 PM

Haha, are you the idiot that took him by any chance? Being the sixteenth ranked winger puts him also behind centres (a more stat rich position) and goalies (a more important position).

Wingers might be less deep than centres but taking 16th at one position at 22 is batshit insane. Especialy since Columbus isnt getting any better anytime soon.

Don't forget defensemen. Doughty, Keith and Green should go before Nash in almost all formats, and Shea Weber wouldn't be a bad pick there either.

The fact of the matter is, Nash is a fifth or sixth round player. Third round is too early -- especially 2nd pick of the third round. I wouldn't go so far as to say "idiot" but it's definitely a classic case of someone being dramatically overvalued.

He was ranked 16th last season (he is likely higher than that based on past seasons), so is the 12th or 13th best winger at 22 a bad move?

Also, it was a keeper draft, so taking him above st.louis, Iginla, marleau and D.Sedin would have been expected.

Im not saying 22 is the perfect spot for him to go in drafts. But as I said above, he is a top end #2 winger with the potential fro much more. If I can get that in the 3rd round I will take it every time

Nash was 11 in his best year ever and his best year ever was miles better than his next best (he scored 79 points and was a + player. He's never cracked 70 prior or since). Given that, I don't think you can say 'he is the 12th or 13th best'. He has been once.

At the end of the day, you'll have to determine what you league measures on the guy. He' unreliable from a point perspective, he'll get 50 something PIMs most of the time with occasional flirtations with 90 and he'll usually be a minus player. If that's worth a third round selection in your 10 team league then by all means take him there. My guess is, if that's the case, your league doesn't measure many goalie stats, has only one starting D slot and is probably running a 3:1 winger to center ratio.

Otherwise, he's a fifth round pick.