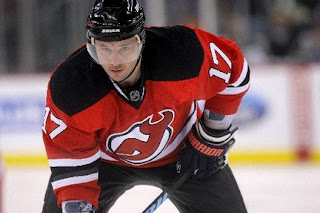 Now that the big Russian sniper is without a doubt staying in the NHL until his bones crumble to dust, we can finally have a look at what fantasy owners can expect from one of the NHL's most prolific scorers.

There was once a time when this profile would have been all but useless.  Kovalchuk used to be one of the most steady and reliable players in the league.  When drafting him, you knew that you'd be picking up 40-50 goals, many of them on the powerplay, and shot totals in the low to mid 300s.

It wasn't all roses with Kovalchuk however.  In addition to the positives, he would also land you solidly in the minus column and his 35-45 assists made it tough to justify using a first round selection, thereby landing him somewhere in the second or on some overzealous manager's roster.

Now, things are different.  Kovalchuk finds himself in a system that is notorious for stifling its offensive stars but one that allows very few goals against.  Like it or lump it, the Devils have a system and it works.

What used to be one of fantasy hockey's most known commodities is now one of its biggest wildcards.  The knock on Kovalchuk in fantasy hockey has always been his +/- and that stat will assuredly take a dramatic turn for the better on the Devils.  What's difficult to gather is what being a Devil means for the rest of his stats.

Moving out of Atlanta and onto a team with some solid offensive pieces will undoubtedly mean an increase in assists.  Less certain are Kovalchuk's shot totals while on a team with fellow shot-happy winger Zach Parise.  As Kovalchuk's ice time dips, I expect his shot totals to fall as well.

The Devils don't play the same deep-trap system they used to and I feel that the effect that the system itself will have on Kovalchuk's numbers is often overstated.  If he sees a dip in goals, it will likely be the result of fewer shots and powerplay time spent playing the point.  With Parise and Elias as capable forward options and very little to speak of in terms of offensive fire-power on defense, it's hard to fathom Kovalchuk playing anywhere other than the point.  Again, this will reduce his number of shots and goals, while likely leading to an uptick in assists.

If I were a betting man, I'm buying Kovalchuk this year, not selling.  I think he'll be a more balanced player in New Jersey, evening out his goal and assist totals while still being a better-than-point-per-game winger.  The dip in shots should be nothing compared to the gains he'll see in +/- on this team.

While he isn't the safe pick he once was, the potential payoff is better than ever with Ilya Kovalchuk.
Posted by Curt S at 3:37 PM