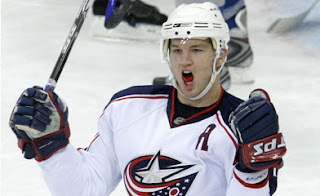 Alright fantasy GMs, it's time to smarten up.

In the name of all that is hockey, do not draft this man!

Every year, without exception, Rick Nash is drafted in the top 25-40 selections of nearly every draft.  Why?  Explain yourselves puck heads.  What is it about this guy that makes you take him so soon?

I play in a pretty competitive keeper league that had our inaugural draft last season.  The guys in the pool know hockey.  Having issued this disclaimer; Rick Nash was drafted 22nd overall.

Last season Nash was a minus player who put up 67 points.  Does that look like 22nd overall-type production to you?

With one season of better than 70 points under his belt Nash has perceived top-tier value.  The reasons for this abound.  He does the 'sexy' things in the game, end to end rushes, big hits and fancy dekes.  He's a very talented player to be sure but he just doesn't put up anything special in the way of numbers.

Even his peripherals are lacklustre for a guy that owners will often claim is a 'power forward'.  Given the evidence, you'd be crazy to expect more than 50 something PIMs from Nash, though he will hit the occasional spike.  His shot totals are mediocre, in the mid 250s.

His team hasn't helped him any as efforts to land Nash a true, first-line centre have yielded nothing better than RJ Umberger (scoff!).  While Brassard is a talent and Voracek is developing, there's no flash or sizzle on this team.  With Hitchcock out of the picture Nash may see an improvement in his offensive numbers but until he has a distributing centreman, he'll be a second-tier fantasy producer.

My advice on Nash?  First of all, let some other chump take him way too early.  Leaving Semin, Thornton or St. Louis on the board in favor of Nash would be a big mistake.  Secondly, don't trade for him.  I guarantee you, whoever drafts him will like him a lot more than they have any right to.

I'm with you. Nash blows. He's a good player if he ever had a supporting cast but he doesnt and probably never will.

HAHA! Who's the idiot that took Nash at 22 overall??!? Ya he goes early every year but THAT early is insane.