Tis the Season for Must Wins 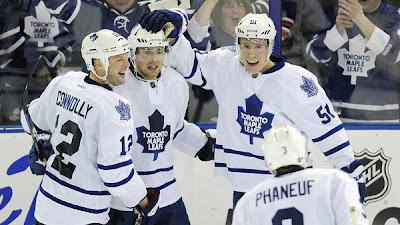 It seems that every year, right around the beginning of March, hockey pundits from coast to coast become enamoured with the term “must win”. It’s an interesting phenomenon, since none of the games, taken in isolation, actually must be won. The only definitive “must win” is of course the game that mathematically eliminates your team from playoff contention.

The closing month-and-a-half of the NHL schedule will be rife with big games as inevitably hockey analysts will anoint each game the defining moment of the season. While that’s not the case, there will certainly be many games from which 2 points will be crucial, and the team’s performance in those key games will have a serious impact on their playoff chances.

Looking at the 6th through 10th seeds in the Eastern Conference last year we can see approximately how many points our needed to make the post season.

It looks as though the threshold will be a bit lower this season but let’s err on the side of caution and say the Leafs will need 90 points to make the playoffs. Sitting with 67 points, 12th in the conference, they’ll need 12 wins in the final 17 games. While it seems unlikely (12 wins would be a winning percentage of  71%) it’s certainly not an impossible feat.

Below we’ve broken down the remaining games into 3 major groupings, the likely losses, the ones we really need to win, and of course, the must wins.

The Likely Losses: Bruins (2), Rangers
Even with Boston’s struggles of late, and an injury to Tukka Rask, I just don’t see the Leafs competing in these 2 games. The Bruins play a physical game, and their defence match up perfectly with Toronto’s undersized top-6. If Kessel can somehow shake the shadow of big number 33 we might have an outside shot at a point from the 2 games, but even that might be more naiveté than practicality.

Ones We Really Need To Win: Penguins, Flyers (2), Islanders, Senators, Devils, Lightning (2)
The Penguins will certainly be a tough beat, with Malkin pretending it’s 2009 and Fleury performing like a top-5 netminder. They do, however, play a more wide open style in the neutral zone, which lends itself well to the Leafs overall team speed.

Normally I would be concerned with 2 games against the Flyers, but Bryzgalov’s quip about beach balls seems to have been a reality most of this season. Philly’s goaltending situation is a bit of a mess (no, side show Bob is not an legitimate option) so I'm hoping the Leafs win the day on both counts.

The Sens, Devils, Islanders, and Lightning are all eminently winnable games. By no means “easy” outings, but these will be critical to the Leafs playoff chances.

The Must Wins: Capitals, Panthers, Hurricanes, Sabres (2), Canadiens
Of course, to satisfy the Hockey Gods, we do have a number of must win contests down the stretch. These are the games where even one loss will likely dash the fading hopes of spring glory.

Historically, the Sabres have presented a problem for the Leafs, but this season has been one of flu in Buffalo. Shipping out Kassian and Gaustad at the deadline has taken away some of their bite, and their top scorers in Roy and Vanek have slowed of late.

Carolina, Washington, and Florida also find themselves in contention for the final 2 spots (albeit a ‘long-shot’ level of contention for the Hurricanes). These are the 4-point games that could actually drive the magical number of 90 points down to 89 or 88. There’s nothing sweeter than the classic win-win of taking points from the enemy and handing them over to the Leafs. Think Robin Hood, if he and his band of merry men simply kept all the riches for themselves. You know, robbing from the rich to give to yourself.  OK, maybe 'common criminal' was a better analogy than Robin Hood, but you get my point.

And finally, what could ultimately be the defining regular season game of 2012, will be a road matchup in Montreal on April 7th against the Canadiens. It is the must win of must wins, and if the stars align it could be the moment of a half-generation for the team.

Tis the season Leaf fans, and our message to the team is simple – Just win, baby.
Posted by Darren K at 8:36 PM