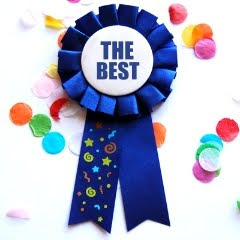 Playing youth hockey throughout my childhood there is perhaps no greater honour an 8 year old can have bestowed upon him or her than being awarded the vaunted ‘Participation Ribbon’. Some kids, the cool kids, as they were called at my school, thought that sports, like life, was all about winning. Boy, were they mistaken. As we all know, the blue participation ribbon carries with it the weight of dozens of gold, silvers, and bronzes.

The Leafs currently sit 12th in the Eastern Conference, tied for 23rd in the entire league. I refuse to write a “Tank Nation” post just yet, holding out hope that there is some miracle playoff push somewhere over the horizon. But with our hopes fading quicker than our position in the standings, it’s become clear the team likely won’t be in the running for any major trophies this year. Alas, the President’s Trophy, Vezina, Art Ross, Lester B Pearson and other hardware will likely be cherished in cities devoid of giant CN Towers.

Fear not fellow Torontians! Even though we might not celebrate the more recognized awards from the NHL, we still have our participation – something no one should take for granted (ask Winnipeg). It is in the spirit of the many blue ribbons we all have tucked away in closets, garages, and under beds, that we hand out some pre-emptive awards to our boys in blue.

The players below may not appreciate the ribbons as much as actual awards from the league, but hey, I bet their Moms are still proud.


Most Improved
Always a tough award to give out, as you run the risk of offending the youngster who was horrible to start the season and managed to improve to 'average' by year’s end. On the Leafs it has to be defensive stalwart Carl Gunnarsson. He’s always been an effective defender, but has taken his game to a new level this year and appears to be a legitimate top-pairing (or at least top-4) defenseman. The offensive stats (4G, 15A) don’t tell the whole story. When watching the games you rarely notice Gunnar on the ice which is a meaningful compliment for a defenceman. Logging nearly 23 minutes per game, and playing in all situations an argument could be made he’s more important to our defensive group than Phaneuf, something few of us would have said last year.

Biggest Surprise
The play of Joffrey Lupul makes this the easiest ribbon to hand out. It’s unfortunate that a shoulder injury will sideline him for most of the stretch drive, as his 82 game numbers would have been gaudy (on pace for 84 points), especially for a player who was considered a ‘throw in’ to the Jake Gardiner trade. The detractors, or ‘haters’, will point out that Lupul has battled injury problems throughout his career and that this is systematic of him as a player. I disagree, as the hit from Krejci and the way in which he tumbled into the boards was more bad luck than anything. There are questions about Lupul’s relationship with Carlyle when they were together in Anaheim, which could stunt Joffrey’s progress next year. Regardless, there is no doubt that Lupul’s play has surprised everyone this season, and he’s outperformed his contract admirably.

Needs Improvement
We’ve written a lot over the last year about Nikolai Kulemin. At times even proclaiming him one of the most important forwards on the team not named 'Kessel'. However, tallying only 7 goals makes it clear he needs to somehow regain his scoring touch. It’s certainly not for lack of effort, as Nikolai works tirelessly every shift, forechecking and backchecking feverishly. I would hope he spends the off season working on the offensive side of his game, because physically he has the talent to return to the 20 goal plateau next season. The one positive we can take from his struggles is that his projected cap number on a new contract has been driven down significantly. Small victories.

Most Dedicated
He’s run hot and cold with fans since arriving, but there is no doubt that Dion Phaneuf is truly dedicated to this team. Like everyone else I can get frustrated at times, whether it’s jumping into the play too often or coughing up the puck in the defensive zone, Dion has his limitations. But when you analyze his play on aggregate, he really has brought an edge to the team that didn’t exist post lockout. He’s a big part of our 8th overall power play (19.3%), and is willing to physically stand up for himself and his teammates. He may never return to his 2007-2008 Calgary Flames form, which may result in some labelling him an underachiever, but he has been far from the problem in Leafland this year.

Got any other awards you'd like to see handed out for a team of underachievers?  Hit us up on Twitter at @bcphockeyblog
Posted by Darren K at 8:31 PM