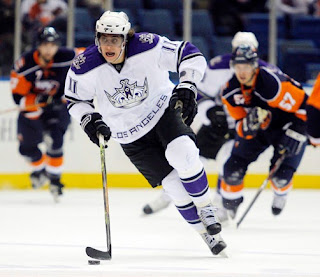 It seems like just yesterday Toews was hoisting Lord Stanley over his head yelling “Hoss! Hoss!” (Great moment by the way, really showed Toews maturity as a captain) but it’s already August 11th. If you’re like me, and Fantasy Hockey is a year round occupation, the chances are you’ve already started to think about your upcoming draft in the fall.

With that in mind – I’m going to provide weekly player spotlights on some players you’d be advised to keep a close eye on come draft day.

First up, none other than the BIG Slovenian himself – Anze (the Giant) Kopitar.

Despite having the softest hands this side of Pavel Datsyuk, the 22 year old Kopitar went unnoticed on most Draft Boards last year (I got him in the 10th round of our Keeper pool) but he will not be surprising anyone this time around. It was a banner year for Anze as he posted 34 goals and 47 assists while playing in all 82 games for the 3rd straight season.

His 81 points (putting him 17th in the league) was impressive. But even more impressive was the fact he posted career highs in goals, assists, shots, powerpaly points, and plus/minus. In the past fantasy pundits have pointed to Kopitar's lack of shots and poor plus/minus as limiting his overall value. However, the development of the Kings franchise, along with great complementary players in Doughty, Simmonds and Smyth have allowed Kopitar to finally scratch the surface of his fantasy potential.

Standing at 6 foot 4, weighing in at 220 pounds he is an absolute workhorse on the ice. His elite puck possession in the offensive zone is unmatched (maybe BIG Joe has a case) allowing him to dictate the Kings attack. His great wingspan allows him to make decisions on the ice at a slower pace than other players. Watching Anze, he never seems frantic or panicked as every pass is crisp and planned out, showcasing the always important “hockey sense.” Blessed with a long and silky smooth skating stride his speed can be deceptive, much like other big men of the past (Mats Sundin is a good comparable).

Last year Kopitar worked hard to shoot more and capitalize on his own scoring chances. A good sign of development for a young player beginning to take on a leadership role.

Am I a bit biased towards Kopitar? – Sure. He is my boy and was a huge part of my 2009-2010 fantasy team. However, that doesn’t change the fact he is a burgeoning young fantasy stud looking to take the next step in his career. I project him to put up 37-53-90 this coming season as he moves into the upper echelon of the NHL

In a one year pool (with standard scoring) Kopitar should be scooped up no later than the middle of the 2nd round. In a keeper league, at age 22, you need to seriously consider Kopitar at the end of the 1st round.
He may not be Ovechkin, Crosby, Malkin or Stamkos – but after that I can’t think of anyone I would trust more with my fantasy fortunes. Do yourself a favour on draft day – believe in the Giant.
Posted by Darren K at 8:04 PM

The opinions expressed above are those of the author and do not necessarily reflect those of BCP or any other affiliated contributors. By no means do we suggest drafting Anze Kopitar before Kovalchuk, Backstrom, Heatley &c. &c.

Career years are so often followed by even better years, right?

The Hockey News hasn't been relevant in a decade.

THN was awesome when they put out the 100 Greatest Hockey Players of All Time. Gretzky was on the cover... in a Rangers jersey... A decade, or two.