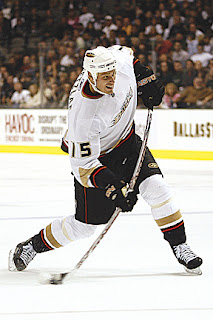 Fantasy managers take note;  Ryan Getzlaf is here to stay.
Getzlaf is huge at 6'4" and 220 lbs.  He's California's other Joe Thornton.  In terms of fantasy output, the 25 year-old centreman is even more than Thornton.
There are a few things about Getzlaf that are known.  Firstly, he's going to get a lot of assists.  Over the past three seasons he's averaged nearly 0.8 assists per game.  If you add goals into the equation, he's a 1.1 point per game producer.  That's respectable output on its own merit.
What makes Getzlaf an elite fantasy option are the peripherals.  In addition to his 1.1 points per game, he also puts  up an astonishing 1.31 PIMs per game to go with it.  As with most centres, his shot totals are a bit lacklustre but what he fails to produce in shots he more than makes up for in powerplay point production.

Finally, Corey Perry has been a lock on Getzlaf's wing and the two have meshed incredibly well together since joining the team. Add to this the fact that Bobby Ryan spends significant time on the top unit as well as on the powerplay and you can be sure that Getzlaf will have the kinds of linemates that will help him pile up those assists.
Last season was a stepback for Getzlaf as injuries stunted his season and threatened his involvement in the Olympics.  Playing through these injuries in an effort to lockdown a spot on the Canadian Olympic roster likely led to some reduced per-game point totals as his speed and agility were severely hampered.  Despite this, he still put up 69 points in 66 games.
There are a few unknowns that linger with Getzlaf as well.  Firstly, his best season in terms of production was a year where Chris Pronger and Scott Niedermayer were playing point on the Ducks' powerplay.  This isn't to be discounted.  While Lubo Visnovsky is a solid powerplay defenseman, he's not a one-to-one replacement for either of those two guys.  Is it possible that Getzlaf never touches 90 points again without those two in the Ducks' lineup?
Moreover, Getzlaf is among the league leaders in stick penalties.  You would assume given his size that his PIMs came primarily from physical plays and thus in the form of such penalties as roughing or fighting majors but you'd be wrong.  Getzlaf gets his penalties from hooking, tripping, slashing etc. and these are the types of penalties that coaches often abhor.  If Randy Carlyle ever reels Getzlaf in, it can only hurt his fantasy value.
The final word on Getzlaf is this; he's a better than point per game player that in a full season will put up better than 100 PIMs.  There are only a handful of guys in the league in any given year that will reach those kind of numbers.  Add to this the fact that he's only 25 and there is no reason that Getzlaf should fall below the first round except in the shallowest of leagues.  If your league doesn't measure penalty minutes then discount him accordingly, but you're still going to see high-80s to low-90s point totals from him and he's going to be among the best in the league in PPP production.
Don't let the pre-mature balding fool you, Ryan Getzlaf is a stud.
Posted by Curt S at 2:58 PM