At one time or another in our lives, most likely during adolescence, we’ve all experienced what it’s like to be bullied. This bullying can range from simple teasing, a swirly in a nearby toilet or something more egregiously bad.


What amazes me about bullying is the strategy sometimes employed by parents in trying to curtail the bullying. The answer, in many cases is “If he hits you, stand up for yourself and hit him back – he’ll leave you alone after that”

This I never quite understood. In most cases (at least from what I have seen) the bully tends to be a significantly stronger or meaner kid than the one suffering the bullying. Which means if the smaller victim were to punch the larger aggressor in the nose the odds are he’s going to get walloped pretty hard back. Suffice to say we as a society need to institute better methods of addressing bullying, but since this is a hockey blog we’ll park the social commentary for now.

We all understood that physical intimidation and to a degree, on ice bullying, were going to play a role in the Leafs-Bruins series. For the past 3 or 4 years the bruins have been, in the opinion of many, the biggest, nastiest, meanest team in the NHL. This is born in large part from their roster containing both Zdeno Chara and Milian Lucic, who are able to do a bit of everything on the ice.

In game #1 the Leafs players attempted to punch the Bruins in the nose, metaphorically and a couple of times literally. The Bruins played a physical game and Leafs tried to match them, finishing every check and engaging in every possible post whistle scrum. In one instance Cody Franson abandoned his position as the lone remaining defender to throw a big hit, leading to a Boston goal.

With both Orr and McLaren in the lineup for game 1 Carlyle seemed determined to stand shoulder to shoulder with the Bruins and see if he could beat them at their game. Carlyle’s two prominent roughians finished with a combined 16 minutes of ice time, compared to their season average of 11.5. This is something the Bruins crave, because in the end few, if any teams, have a roster that can match the sheer size and physicality of the Bs. The possible exception would be either of the St. Louis Blues or Los Angela’s Kings.

In the 2011 Cup finals the Vancouver Canucks were able to have some success against Boston by staying disciplined and using their league best power play (24.4% in the regular season, 20.4% in the post season) to penalize the bruins for their feisty play. The Leafs by no means have the same level of elite power play but the strategy and template is one they seemed to employ in game #2.

The one asset the Leafs ultilized marverlously in game 2 was their forwards distinct speed advantage over Boston’s defense. A grouping of Chara, Seidenberg, McQuaid, Boychuk and Redden on the back end provides ample opportunity to expose their lack of quickness. It’s probably unfair to call Chara “slow” as he has one of the most unique skill sets in the league, combining size and puck handling in a way not seen since Pronger. Redden, while a smooth skater in his younger years is nearing the age of 36, and appears to be slowing somewhat. Their team is built splendidly to defend against the cycle and gain pucks along boards where their size is an asset. If the Leafs can continue to generate speed through the neutral zone and push the pace against the Bruins defense they’ll be able to score more goals off the rush.

Last night, we witnessed a Leafs team that was skating and pushing the play in the right direction. Both the JVR and Kessel goals were a direct result of team quickness and the inability of Boston to keep pace. The insertion of Jake Gardiner and Matt Frattin buoyed the overall team speed and seemed to create a more balanced attack. Throughout the evening Carlyle mixed and matched his lines numerous times in an effort to release Kessel from Chara's rather large shadow. Had the team dressed both tough guys again they may have been more limited in how much line shuffling could be done. 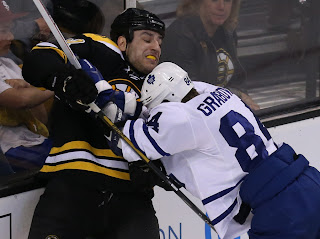 I don’t mean to say the Leafs weren’t a physical bunch in Game #2, because they certainly were. But it was the kind of toughness that we crave; fighting hard for loose pucks, battling in front of the opposition net, playing physical on defense along the boards. Near the end of the game Grabovksi finished a hard check on Milian Lucic that almost knocked the Vancouver native on his rear end. It was a fantastic moment to watch and was indicative of what I liked all game from the Leafs. Grabbo moving his feet, playing a fast brand of finesse hockey while still finishing his check when needed.


Colton Orr didn’t register a fight in game #2, but landed powerful body checks on Zdeno Chara and was an absolute load to manage in front of Tuukka Rask. That’s the kind of toughness a team can always use and I much preferred watching Colton contribute in that manner, than if he had fought Shawn Thornton for the umpteenth time.

If the Leafs can continue the trend of game #2, blending toughness with team speed and finesse, they could be poised for success in game #3. While the team is still an underdog in this series, they showed on Saturday night that there exists a formula for success against the Bruins, and it doesn’t necessarily have to involve Colton Orr punching anyone in the nose.