Manufacturing Goals in the Post-Season – The Power Play

This week will mark the first playoff appearance by the Maple Leafs in nearly 10 years. While the act of simply extending the season past April has many proclaiming this year a success, there’s no doubt that fans would also enjoy a playoff round win as the proverbial cherry on top of any already thrilling year.

After reading a number of articles over the last week it appears the Leafs need a myriad of different tools in order to win in the postseason, chief among them: confidence, momentum, toughness, focus, enthusiasm, gumption, quick-starts, effort, mental fortitude, and concentration.

While those things are critical ingredients for any Hollywood portrayal of a sporting event, the winner of a hockey game is only 50% of the time the team that spews the greatest number of platitudes. The winner, almost without exception, is the team that manages to score the most goals. As hockey, at it’s very core, has always been, and remains, a goal scoring competition.

The website quanthockey.com provides a chart (shown below) that compares the average number of goals per game in an NHL regular versus post season game. Throughout nearly the entire history of the league goal scoring has seen a decrease going into the playoffs. There are some exceptions, most notably in the 1950s where scoring seemed to increase in the post season. However, during the modern era of the league goals seem to be scored less frequently when the games matter most. 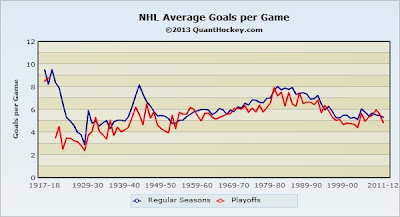 We can ascribe this dip in goal production to a number of different factors, the two I most agree with being 1) Teams simply check more vigorously, with players putting a greater focus on two way play and ensuring that they are more committed to defensive tactics and systems 2) Coaching staffs are able to better game plan against the opposition over a 4 to 7 game series.

The question is how can the Leafs continue to manufacture goals and mitigate, as best they can, the factors that lessen goal production in the playoffs? The challenges faced during 5 on 5 even strength play will differ significantly from that of special teams. The Leafs managed a power play percentage of 18.7% in during the regular season, 14th best in the NHL. Herein lies the best opportunity for the team to produce goals while avoiding the tight checking of even strength.

The team’s offence on the power play has been more balanced than some teams, with no player amassing more than 6 goals and seven with greater than 3 tallies. Below is a list of the Leafs top powerplay goal producers:

Watching the games of late we can anecdotally surmise what has been working for the Leafs; Franson and Phaneuf have been getting well-timed, hard shots through from the blue line, forcing the opposing team’s forwards to over commit on point coverage; Kessel has been able to generate space and create opportunities from the half wall; JVR and Lupul (when healthy or not suspended) have been driving the net and helping to create rebounds and second chances.

During the final few games of the regular season Carlyle experimented with Kadri and Kessel playing on the same line (more out of necessity than imagination with Bozak injured). The chemistry was palpable between the two, with Kadri possessing the elite passing ability Kessel hasn’t had in a linemate since Marc Savard in Boston. Looking to the playoffs, it would be behoove Carlyle to at the very least pair Phil and Nazem together on the first powerplay unit. A forward set up of Kessel on the half wall, Kadri near the icing line, and Lupul/JVR hovering in front could certainly be potent.

The more limited scoring opportunities during even strength will make capitalizing on special teams paramount to success in the post season. If the team can continue to generate shots from the point and utilize Kadri and Kessel from the half wall and behind the net the Leafs should carry forward the production they enjoyed during the regular season.
Posted by Darren K at 4:26 PM