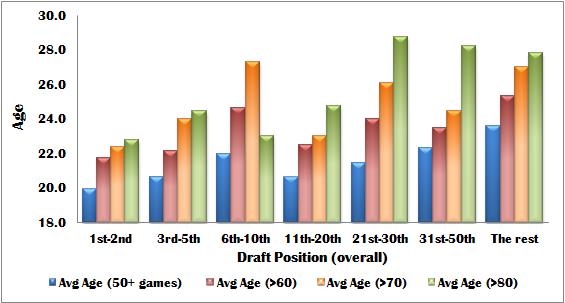 Nazem Kadri was drafted 7th overall and is currently 22-years old.  Based on the chart above, we should expect Kadri to play 50+ games this season and probably to get close to putting up 60 or more points if he's ever going to become an elite point producer (a 60 point pace this year would be about 35 points in this truncated season.)

Also of interest, should Kadri ever become a 70-point scorer, we should expect that to occur sometime between 23 to 25 years of age.  What this means, in my view, is that Kadri is well suited to be a key piece of this team whether they're able to ice a competitive product with the existing core, or if they should decide to move toward a more conventional rebuild.

The bad news is how this data reflects on Leafs prospect Joe Colborne.  Colborne has yet to play 50 NHL games in a single season and unless you think he's going to step into the lineup full-time next season and put up 60-points while making that transition then the data would suggest that he's unlikely to ever be a high-end point producer.  This probably doesn't surprise many of you at this stage but when the Leafs acquired Colborne, he did seem to have the potential to get to that level, however unlikely.

Now there are a couple of things to take note of when considering this data, foremost among them is that this only takes into account those players who did produce at an elite level and not those who flounder.  As such, the data here is better used as a development check than a predictive tool (ex. Kadri is on track, Colborne is not).

So far this year, Kadri has looked exceptional and has undoubtedly won over some of the skeptical set.  If he can toss up a further 26 points in the remaining 39 games, he'll be right on track to be one of the better point-producing forwards in the NHL moving forward.
Posted by Curt S at 4:43 PM