Why Getzlaf is Not the Answer 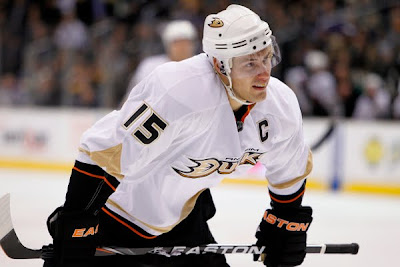 No matter where I go in the fair city of Toronto, I’m surrounded by the same fevered whispers. The guy in front of me at Tim Hortons, uttering the same sweet nothings as my dentist.... Getzlaf.... Getzlaf.

Since news broke last week that the Leafs were in serious contention to land struggling Anaheim Ducks' center Ryan Getzlaf before the trade deadline, fans have erupted with anticipation. The mainstream media, the blogosphere, the twitterverse (shameless plug, make sure you’re following us @bcphockeyblog) have all reinforced the rumours that Getzlaf may be coming.

Like the Princess with the incredibly long hair who can’t seem to get out of that tall tower (Ed. Note: Rapunzel), we Leaf fans are waiting for our White Knight to arrive. On the cusp of our first playoff berth since before the lockout, it’s not surprising that our collective hearts would be aflutter.


I fully admit to having bought into the superstar hype for this looming trade deadline at 3pm on February 27th, but Ryan Getzlaf is not the answer. Give me Rick Nash, Zach Parise, Alex Semin even. But do not – do not bring me Getzlaf... and heres why:

Getzlaf gets part of his reputation from the experience of winning the Stanley Cup with the Ducks in 2006-2007. However, astute hockey fans realize Ryan was far from a key cog in the machine that was the Ducks that season. As their team included future Hall of Famers Chris Pronger and Scott Niedermayer patrolling the blue line, J.S. Giguere still wearing the XXXL goalie equipment, and a young Teemu Selanne (which evidently isn’t that different from an old Teemu Selanne). Getzlaf recorded 58 points in 82 regular season games that year, and added 17 in 21 games in the playoffs. Certainly not awful numbers, but far from those of a bonafide superstar.

Getzlaf is heralded for many things – his hands, his size, his toughness. One thing he is not known for – his quickness. Watching him try to change directions is more painful than turning around the GO train. His talents work well in an offense that is built to grind out defences and control the puck down low. The problem is, the Leafs have a group of top 9 forwards that is largely undersized. Our team is built on speed and the ability to forecheck teams insatiably in the offensive zone. A player like Getzlaf will force his linemates to slow down. This means Lupul and Kessel (his expected wingers) wouldn’t be able to play the same attack game they are now. Without their team speed the Leafs would not be sitting on the inside of the playoff picture at the halfway point of the season. It’s said that ‘speed kills’, and in the new NHL speed wins.

Our group of centers has rounded into form nicely this year – with Connolly, Graboski, Bozak, Colborne, Kadri (eventually), and Steckel. I understand that a few of the above players would likely leave via trade to acquire Getzlaf, but at least 3 of them would remain. Our need really isn’t down the middle; it’s on the wing. Bringing in some size and power at the winger position would do wonders to our playoff chances where the checking becomes tighter and the goals greasier. Which is why I want Rick Nash to don the blue and white. He has comparable size to Getzlaf, but also possesses the speed necessary to fit seamlessly into the Leafs' offense. Adding some strength and size to the wing will complement our smaller playmaking centers, and allow the first line to continue with its run-and-gun style.

The truth is, Ryan Getzlaf is a heck of hockey player and under normal circumstances I would welcome him to the city of Toronto with open arms. But today, with this team, clinging perilously to our first playoff berth in nearly a decade – I’m not taking any chances. Enjoy the sunshine Ryan.
Posted by Darren K at 8:52 PM

I would consider trading guys like Lombardi and even maybe MacArthur if a trade for the right player came around.

At the end of the day, the leafs don't have a problem on offense, they have a problem with defense / goaltending. They are amongst the worst in the league in goals against this season. A Getzlaf type player wouldn't help that much in these areas where Toronto's struggling.

Would you say that Bozak and Connolly are pivotal to the rush game now? I mean, Connolly seems to keep up, but Bozak isn't usually in that rush as well - that's the Kessel-Lupul connection, and I don't see how Getzlaf could be a detriment to the team, especially if he improves in-zone and defensive play (both areas where Lupul/Bozak/Kessel looks less impressive).

Further, Rick Nash plays wing. Which means he's taking either Kessel or Lupul's spot, or isn't playing on that top line. Then we have the same problem of need an elite center long term, plus replacing whatever assets we gave up in a deal for Nash.

And Kadri has been playing wing. Grabovski is UFA this summer and only *may* be re-signed. That means we've got Connolly, Bozak, Colborne, and Steckel down the middle, and Connolly is only around for one more year. That's a lot of pressure on Colborne to be a #1-caliber center, and I'm not sure we want to toss all our eggs into one basket.

Great post. I know Getzlaf is a good player, but he isn't close to Nash or Eric Staal.
Having said that, I don't like in season deals. They almost never result in the impact wanted.(Gilmour being an exception.)
The Leafs should start piling up that folding money to throw at Parise over the summer. They aren't gonna win the cup this year anyway. Make no deals and see how this young and talented group comes together, and how far it gets.

I've got a post coming up this afternoon about just that. We don't always agree here at BCP!