In Search of Lost Scoring: Where Has The Leafs' Secondary Scoring Gone?

The beginning of the 2011-12 season was a euphoric time for Leaf fans.  We had Phil Kessel, Joffrey Lupul and Dion Phaneuf all lighting it up offensively, James Reimer playing well in net, and consequently, we found ourselves at the top of the NHL standings.  It was easy to be happy, but also easy to overlook some of the team's deficiencies.

"Happiness is beneficial for the body, but it is grief that develops the powers of the mind."

While 'grief' might be hyperbole for the position we presently find ourselves in, the fall from the conference penthouse to the fringes of playoff contention has certainly been cause for reflection in Leaf Nation.

Danny Gray and JP Nikota recently released Leafs Nation's inaugural podcast where they touched briefly on the Leafs' problem with secondary scoring.  One look at the team's scoring leaders shows that there's a definite gap between the leaders and the pack.

Lupul and Kessel currently sit at 52 and 51 points, respectively.  Behind them, Grabovski has 32 points.  The next forward on the list is Tyler Bozak who has precisely half of Bozak's total.  It's clear that this team needs top-six help.

After Grabovski, Kessel, and Lupul, the team's top-six gets murky.  Kulemin has struggled offensively this season, MacArthur has shown flashes of strong play but has found himself bounced around the lineup, Connolly has been bounced out of the top-six in favour of Bozak at times.  In short, we seem to have a lot of hybrid 2/3 line guys, but very little clarity with regards to who we should lean on when Kessel and Lupul's production slows down. 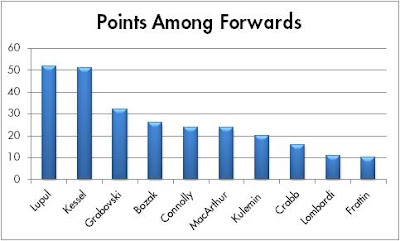 Looking at the chart above, it's apparent that there are two players who are carrying the offensive load.  There are two ways of looking at the information above.  The first would be,  "even with such great production from Kessel and Lupul, we're still only a playoff bubble team."  Conversely, one might say, "even with Kulemin, Connolly, and MacArthur underachieving, we're still a playoff bubble team."

The conclusions, however, are obvious: The Leafs need more production from players not named Kessel or Lupul.  This production could easily come internally as Connolly, MacArthur, and Kulemin have all shown flashes of strong second-line production.  Having said this, I'm sure Burke would feel a lot more comfortable if he were able to add a player with a Connolly-esque track record, rather than depending on someone with Kulemin's comparatively brief offensive resume.

Ultimately, there's been a great waiting game for the Leafs' secondary players to produce.  Grabovski has come around of late and has put up some points when the team has needed him to, but he's been alone in this regard.  With the trade deadline looming, how much longer can we afford to wait?

"It comes so soon, the moment when there is nothing left to wait for."
Posted by Curt S at 1:21 PM