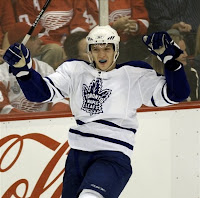 Also, if you have a chance and aren't already doing it, check out maple stir-up's blog at http://maplestirup.com/ It's good stuff.
Posted by Curt S at 9:11 PM

Agree on all counts.

Kulemin is not worth 3 mil, but isn't terribly far off. Both sides have to posture in order to establish suitable negotiating positions, but ultimately, Burke holds the cards here because he holds Kulemin's rights. I still believe this deal gets done before next season.

I like Schenn too, but I think his value as a trade commodity is worth considering moving him for a more pressing need. Ryan fits the bill. I'd make the move too.

I've always liked Spezza, but his contract just isn't worth it.

I really feel that this off-season is Burke's chance to really put his stamp on the team. Last season was about acquiring assets so that he could afford to make a move like the one proposed above -- now it's time to make the Leafs his team.

By my count, only Grabo, Kaberle, Kulemin, Finger and Schenn are on the team now who were also on the team when Burke came in. I'd say Burke's made his mark already, n'est pas?

Pas. While he's been able to move bodies out, he hasn't had much of an opportunity to replace them. Most players were moved out for futures (prospects or picks). Until those players develop or he fills the gaps with the free agents he wants rather than merely some stop-gaps then I wouldn't say his mark has been made.