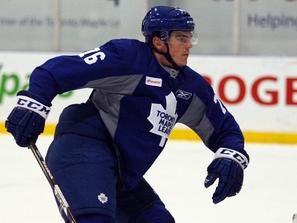 
The Guelph team that Finn was a part of last season wasn't particularly strong, finishing 7th of 10 teams in the OHL's Western Conference.  Finn led the team in scoring by defensemen with 48 points in 61 games which is a great accomplishment for a guy who started the season as a 17-year old.  His -13 rating seems a bit troubling on the surface considering the team only allowed 4 more goals than they scored, but Finn was relied on heavily by head coach Scott Walker and can expect more of the same this coming season.

Finn has a good shot which he used to pick up 5 powerplay goals last season and he can certainly expect to quarterback the Guelph powerplay again this season.  Once he adds some size to his frame and gets over 200 lbs, one would expect some added velocity to his slapshot and if this proves to be the case, he'll be a player who is in many ways reminiscent of Francois Beauchemin, though with less of a physical edge.  Statistically, the two players compare almost identically (Beauchemin's draft year: 12, 35, 47, Finn's draft year: 10, 38, 48) and Finn's size projects out to be roughly what Beauchemin's is at slightly over 6' tall and 205 - 215 lbs.  Of course a great deal would have to go right for Finn to be a Beauchemin-calibre NHLer but he certainly seems to possess the raw materials.

In terms of timeframe, I think Jesse Blacker provides a pretty good framework for a solid development trajectory of a defensemen chosen outside of the first 15-picks.  Blacker was chosen late in the second round in 2009 which means that this season will be his fourth since his draft year.  At this stage, the most likely scenario would see Blacker play a prominent role with the Marlies and be a candidate to be called up to the Leafs in the event of an injury.  Assuming he develops well, we can expect to see Finn suit up for his first games as a Leaf in 2015-16.

I'm really looking forward to watching Finn play this season and he's going to get significant icetime against tough competition.  Guelph plays Western Conference favourites London 6 times and perhaps an equally strong Kitchener team 8 times.  Those are the types of tough matchups where defensemen really get to test their mettle and Finn will be looking to show that he can compete with the best that the OHL has to offer.  It may be early, but Finn looks like he's got a good chance to be a solid addition to the future of the Leafs' defense.

I live in Guelph and saw a lot of Finn last year. He was a Godsend. Great pick by the Leafs.