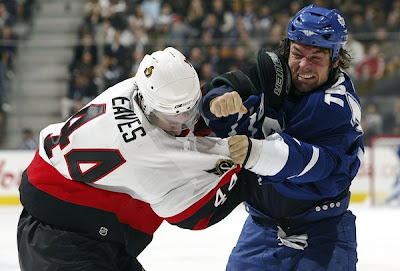 This might be my favourite Leaf photo of all time. It has nothing to do with the playoffs, a pretty goal, or history – it’s just pure, unadulterated awesome.

After Patrick Eaves catches Tucker along the boards with a relatively clean body check – Tucker pops up, eyes bulging (as per usual)a little upset that this young guy would hit him, and at the boards no less – he proceeds to grab Eaves by the collar and challenge him to a little fisticuffs.

The rookie Eaves wasn’t exactly familiar with fighting conventions in the NHL – and decided to leave his hands to his side (clearly a rookie mistake, he likely didn’t know Darcy was a little insane). Tucker – not one to take no for an answer, decided to fill Eaves with a couple rights anyway.

Thankfully Patrick manages to block the majority of the punches with his face before any real damage was done. The photo captures the moment quite beautifully.

DEATH, TAXES, and Darcy Tucker will F%$# you up!