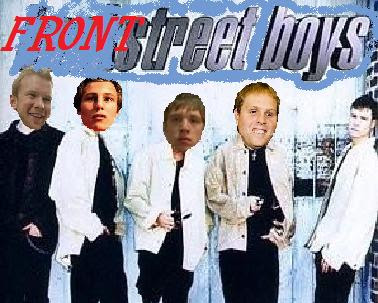 Luke Schenn as Nick - He's the baby of the group.  Schenn's babyface will win over the female fans but he looks young enough that most men can't be bothered to feel jealous over it.  Other than the 100 lbs difference I think it's a good comparison...

Nikolai Kulemin as Howie - Who?  Exactly.  I had to look this guy's name up and I was in middle school when the Backstreet Boys stormed on to the scene.  Kulemin is the same way.  Sure, he's not great looking;  sure, he isn't the best singer; but take him out and you'll notice the product just isn't the same.

Phil Kessel as A.J. - You better believe he's an ugly, ugly man but boy does he score!  Let's hope scoring is all that Phil is addicted to.

Brian as Brian - Much like the Backstreet Boys, the Frontstreet Boys will need someone to sing.
Posted by Curt S at 3:36 PM

Haha!!! I see what you did there. ACC is on Front Street. This is working for me on so many levels.