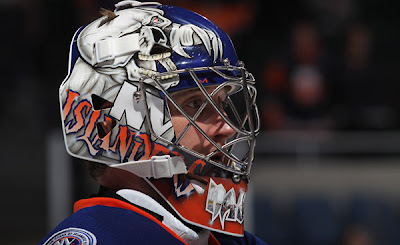 2011 showed us the frustrating and polarizing sides of Toronto Maple Leafs goaltending. From the 30 game Vezina-like stretch strung together by James Reimer to close out last season, to Jonas Gustavsson’s AHL style performance during his run as the de-facto number one earlier this year.

Truth be told, we haven’t had consistent goaltending since Eddie the Eagle graced the blue paint all the way back in 2004. Belfour is only 46, and one has to wonder if he still wouldn’t be our best bet between the pipes today.

I try not to get lost in the numbers for a goaltender – as they can be extremely deceiving. 30 shots from the blueline on any given night can be different from 6 quality chances from the slot. Over a 20 or 30 game span a 'tender's GAA and save percentage can be skewed and not necessarily show their true ability. That said, the numbers for the Leafs aren’t pretty.

Reimer currently sits with a 3.01 GAA and a .900 save percentage, and his Monster of a back-up is carrying 3.28 and .898 respectively. Both sets of numbers are better suited for a late 1980s style NHL when Gretzky was flirting with both 200 point seasons and Hollywood starlets.

I give Mr. Burke a lot of credit for the job he has done with our skaters. The top 3 lines have more depth and scoring punch then we’ve seen in the last 5 years, and our defence is legitimately in the top half of the league.

Unfortunately, no amount of improvement up front will mask our shortcomings in net. James Reimer was sublime last season and for a moment it looked like we’d stumbled onto the next dominant Leaf goaltender. However, now that every team in the league has seen him on multiple occasions it appears the secret is out – shhhhh don’t tell anyone glove high is kind of open – like, every time.

Burke was smart in giving Reimer a contract extension through 2013-14 with a cap hit of only $1.8 million. It’s a manageable number in the event James is relegated to a backup or time share role.

Before you roll your eyes, or complain he’s not young enough, or he's washed up, remember this – Nabby is only 36, and right now carries an incredibly friendly cap hit of $570,000. He’s about as proven of a commodity you’ll find on the trade market, and has been through many a tough battle with the San Jose Sharks through the 2000s. Before his unceremonious departure to the KHL in 2010 he was considered by most a top 10 goalie in the NHL.

Is it a perfect situation? No. Would I prefer to be watching a Henrik Lundqvist or Carey Price backstopping the buds? Of course. But as a talented 36 year old starring down what will likely be his final NHL contract this summer is there a more motivated 'tender on the planet? He’s never won a cup, and would like nothing more than to make a deep run this spring to prove the pundits (or as the kids say, the ‘haters’) he’s worth every penny of a $3-4 million two year contract this summer.

Heck I haven’t been this excited about a Russian since rumours surfaced of Sergei Berezin's escapades with one Anna Kournikova.

I like James Reimer, Jonas Gustavsson, even Ben Scrivens – they seem like good people. But the time has come to bring in a guy sporting the resume and pedigree needed to get us to the big dance in June. It’s been far too long my fellow Leaf fans, and no matter how many cold beers I consume, the taste of Roenick’s overtime winner in '04 just won’t wash away. I need new memories, new playoff lore, and I think Mr. Nabokov is just the man to deliver it.
Posted by Darren K at 4:26 PM