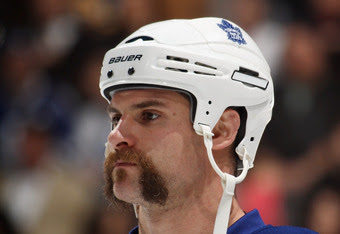 Maybe it’s the back-to-back wins over the New York Islanders this week.

Maybe it’s because we’re sitting tied for 6th in the Eastern Conference standings with 55 points heading into the All Star break.


Whatever it is, something’s in the air today, and it has me feeling a little friskier than usual towards the good old boys of the Toronto Maple Leafs . The Buds have given us plenty to cheer about over the past week and we at BCP are riding the euphoric wave.


In keeping with the spirit of good vibrations, we’re bringing back 'The Man Crush': an All-Leaf edition. For those of you unfamiliar with the intricate details of the hockey Man Crush allow me to explain (or you can check out the original article here.)


Remember the way you felt towards that cute girl who you sat behind you in grade 8 geography? Or how you went to the theatre five times to see Cameron Diaz in 'The Mask'? Think of your emotions the first time you saw Britney Spears in “Toxic” (anyone reading this who hasn’t seen the video – You Tube – you’re welcome)


Of course the Man Crush differs widely from these classic feelings towards the girl next door, or the scantily-clad Hollywood starlet of the moment but the symptoms are the same.  Or... at least... some of them are.


The Man Crush is something special shared between you and your favourite hockey players. It’s the aw shucks charm of a Colby Armstrong, mixed with the raw intensity of Captain Phaneuf, topped off with Mike Brown's moustache. It’s the feeling you get when Phil Kessel drops 2 goals and an assist while turning two categories in your head-to-head fantasy league. It’s the wry smile you crack every time you see a Torontonian on the street proudly donning his or her blue Optimus Reim T-Shirt.

We’re deep into January and the playoffs are within reach; the time is right for a little Leaf Lovin’. Without further adieu, our top 5 Man Crushes of the moment:


Jonas Gustavsson
With a record of 7-3-1 in January the Monster may finally be living up to his mighty nickname. Guilty of chasing pucks, and trying too hard to make saves (if that’s possible) early in his Leaf tenure, his game has become more calm and consistent of late. I’ve liked this guy since Burkie hauled him over to North American soil from Sweden 3 years ago. If you can grow your hair out a bit longer, and lead us deep into the playoffs you’ll have a chance at 1st spot on this list, Jonas.


Nikolai Kulemin
The absolute heart and soul of this hockey team (Ed. Note: Grabovski) – and I defy anyone to tell me differently (Ed. Note: Seriously, it's Grabovski). His 5 goals and 15 assists are certainly not awe inspiring, but he brings his best effort every single shift. There isn’t a player on the roster that has his combination of size, speed, hands, and forechecking ability. He will make his presence on the stat sheet known eventually; in the meantime, enjoy everything else he brings to the table. Besides, Gretzky once scored 9 goals in a season, and everyone seems to think he was pretty good.

Mike Brown
Perhaps the only player in the league (outside of George Parros) man enough to rock the 1970s style moustache. As the Leafs' resident tough guy he deserves a spot on this list. While he may not be a heavyweight in the truest sense, he can chuck knuckles with the best of 'em. When his face comes across the jumbotron at the ACC I can’t help myself from blushing – the true mark of a stud.


Jake Gardiner
I’ve been waiting for his nickname of “Jake the Snake” to stick, based on his ability to skate the puck out of trouble in the defensive zone -- this guy is greasy! How much do the now rebuilding Ducks regret losing this blue chipper and that other guy that came with him (Joffrey Lupul, 52 points, 49 games) for a bag of used pucks... Oh, and Francois Beauchemin.


Phil Kessel
Can we finally stop with the Seguin comparisons? Is it officially over? I believe that when all is said and done Phil Kessel will sit shoulder to shoulder with men like Gilmour, Sundin, and Keon in the pantheon of Maple Leaf greats. He has been nothing short of extraordinary this season. With 26 goals at the break and a renewed commitment to the defensive zone, he has elevated himself into the game’s elite. Most crushes fizzle out over time but, at 24, the best is yet to come with Phil.


The Cowboys may have their cheerleaders, the Raptors their dance pack, and Edmonton their Oiler Octane. But we Leaf fans, we have only our guys, and I wouldn’t have it any other way.

Hit us up on Twitter at @bcphockeyblog and fill us in on your Maple Leaf Man Crushes
Posted by Darren K at 9:09 PM

Nice article.... Ya Gretzky score only 9 goals one time, but it was his last season and he also got 50 assists or so... haha

Still, it might be a bit early to make the Kulimen - Gretzky comparisons

In fairness to Darren, it probably isn't going to ever get any easier...

I would like to amend the list to include Lupul. What a stud putting up with the hecklers in Ottawa this week