On the Horizon: Playoffs and the Boston Bruins 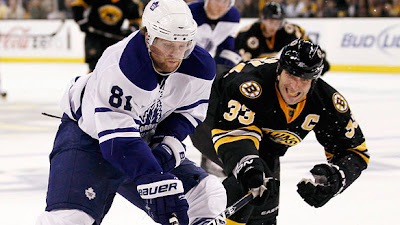 The Boston Bruins scare me.

It’s not an easy thing for a guy to admit but, in a 7 game playoff series, those guys give me the hee-bee gee-bees.

It's the same sensation I felt toward the person, animal, monster, or whatever he was, living inside my closet, under the bed, and on occasion outside the bedroom window. He only seemed to visit on dark rainy nights, or after I had mistakenly watched “The Blair Witch Project” alone at the age of 13. Respect the censor's rating, I did not.

Anyone who pretends to know anything about hockey (and we here at BCP love to pretend), understands that the path to the 2012 Stanley Cup is paved straight through the Bruins backyard. Any team coming out of the East is destined to take a trip through TD Garden and that’s bad news.  It's bad news for most teams, but especially so for our boys in blue.

The Leafs record against the Bruins this season is a lowly 0 and 4, with some of those losses being of the ‘blowout’ variety. Given that we’re sitting in 8th in the conference with 62 points, and the Bruins are 2nd with 70 points, it’s entirely possible we’ll face Boston in the opening round of the playoffs.

After 8 long years of playoff absence, any sort of appearance, cameo, or drop-in will certainly be invigorating for Leaf fans. However, an embarrassing 4 game sweep at the hands of a hated divisional rival will quickly dispel many of the good vibrations. Don’t we want just a little more? Shouldn’t a playoff round win, or maybe 2, be the stated goal this point?

In the movie Wall Street Gordon Gekko famously says, “greed is good”, and when it comes to sports, I tend to agree. Challenging for a playoff spot deep into February was the first step, but now as the playoffs loom, I’m starting to think big: Zdeno Chara big.

The Bruins do have a lot of things going for them as the playoff stretch drive approaches. They’re big, they’re tough, they have 3 lines that can both score and beat you up in the parking lot after the game if needed. The referees seem to abide by a different edition of the NHL rule book for them, where punches to the head, goaltender interference, and the instigator rule don’t seem to exist. Reminds me of when Colin Campbell was the league's chief disciplinarian and had a myriad of explanations for every suspension he doled out. Hey, doesn’t his son Gregory Campbell play for the Bruins? It’s just a world of friendly coincidences I suppose...

The real question is; can we possibly beat them? And if we can, how the heck do we plan to do it?

Thankfully, we here at BCP have developed a 5 step plan for the Maple Leafs, with the intention of de-throning the vaunted Bruins. Think FDR and the New Deal only with less importance, thought, and detail.

1. Hit Chara. When you watch a game against the Bruins it hurts the mind to witness how little contact Chara takes over the course of a game. Most forwards avoid finishing their checks, and instead do a quick ‘fly by’ or stick check as Zdeno moves the puck to the nearest outlet. He may be the biggest, baddest guy on the ice every night, but that doesn’t mean he isn’t human. At nearly 35 years of age he’s still in fantastic shape, but no longer in his prime. If we’re playing him a playoff series he needs to be hit, and hit hard every time he touches the puck. If you’re able to combine a signifcant level of physical punishment with the 25-30 minutes he’s logging a night, hopefully by games 4 or 5 of the series he’s beginning to slow.

2. Shoot from anywhere. Tim Thomas gets a lot of credit for being a ‘revolutionary’ goalie, as his style is truly one of a kind. He attacks the puck and challenges shooters in a way unlike any other goalie in league. The by-product of this style is he’s rarely in a stable position to make a second or third save. Thomas is often forced to flop around the crease, in an attempt to recover from overcompensation on the first shot. If the Leafs can shoot, and shoot a lot, they’ll generate rebounds and second scoring chances. Tim is great goalie, and he’ll be tough to beat, but rebounds combined with traffic in the crease are the perfect tonic to solve his technique.

3. Top-6 size. No team will be able to match the sheer size of the Bruins. Maybe not since the Broad Street Bullies of the 1970s have we seen a team with the mix of size and toughness that the Bruins possess. While we won’t be able to match that, the Leafs do need to address their lack of size at the trade deadline in the way of a top-6 forward. The checking in playoff hockey is significantly tighter than the regular season. Rarely do we see the wide open end-to-end play that can characterize mid-season games. As a result, the ability to cycle the puck, and control the offensive zone becomes even more essential to success. Players like Ryan Getzlaf, Rick Nash, Jeff Carter, or Bobby Ryan would go a long way toward beefing up our scoring lines and allowing us to better cycle against the Bruins defence.

4. Don’t retaliate, ever. Of course this is easier said than done, and over the course of a 7 game series it’s inevitable that there will be the odd bout of fisticuffs, or post-whistle scraps. The key is that the Leafs don’t let this become a recurring theme and allow people like Campbell, Lucic, Thornton and Marchand say and do what they want between the whistles. With our penalty kill (albeit improving) still a sore spot for the team, it’s critical that we remain out of the box and take the focus away from special teams.

5. Phil Kessel: Utility Man. In every game Kessel has played against Bruins since the trade they have matched him up against Zdeno Chara. This has proven to be an absolute disaster for Kessel (in fairness does any player matchup well with Chara?) as Zdeno’s long reach and physical nature have held Phil more or less in check during every encounter. There is no way to completely solve this, but to combat it Wilson needs to experiment with Kessel in a number of different positions, especially on the road where the Bruins will have the last change. I want to see Kessel playing the point at times on the Power Play, taking a shift with the 3rd and 4th lines where possible, and sporadically switching wings with Lupul. Offensive production from Kessel will be the key to any potential success this post season, and it begins with keeping him out of big number 33’s shadow.

Disagree with our 5 point plan? Have a secret method of defeating Zdeno (Ed note: kryptonite?)? Or do you simply want to compliment Curt on his burgeoning career as talented Microsoft Paint artist? Hit us up on Twitter at @bcphockeyblog
Posted by Darren K at 7:20 PM