Far From The [Maddening] Crowd: Why We All Need To Relax On Nazem Kadri

The word 'bust' has been thrown around a little too liberally of late.

Maybe the 2003 Draft Class has just elevated everyone's expectations beyond all reason.  Maybe Luke Schenn having an incredible rookie season as a 5th overall pick changed our definition of what it means for a draft pick to have succeeded.  Whatever the reason, our heart of our shoes, we Leaf fans can't seem to give Kadri his dues.

Now granted, Kadri hasn't outperformed some of the players from his draft class.  Tavares, Duchene, and Evander Kane have all established themselves as fulltime NHLers and all play prominent roles on their respective teams.  Let's remember though, that these players were selected before Kadri and there's a reason that was the case.

If we look at the forwards selected more immediately in Kadri's range, we have Brayden Schenn (5th), Nazem Kadri (7th), Scott Glennie (8th), Magnus Paajarvi (10th), and Zack Kassian (13th).  None of these players has truly made their mark on their respective teams up to this point.


I wanted to look at Kadri's numbers across a bit of a larger cross section though so I decided to pull out the players from the preceding year's draft and look at only their first three seasons' production.  The players from 2008's draft were Nikita Filatov (6th), Colin Wilson (7th), Mikkel Boedker (8th), Josh Bailey (9th), Cody Hodgson (10th), and Kyle Beach (11th).  Once again, I've subtracted this season's production out of the numbers.  Also, keep in mind that there are still about 30 games (give or take) left in this season so I felt that averaged stats would be a bit more instructive than the raw numbers.

Before we get started I'd like to point out that neither Scott Glennie nor Kyle Beach have played in the NHL yet so they wont appear in any of the graphs but keep them in mind when comparing Kadri against his peers.

When looking at points-per-game between the 11 players included, Kadri places 3rd overall and first in his draft class. 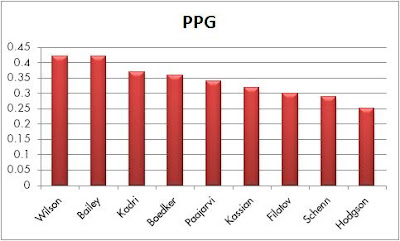 Of the top five players in points-per-game, Kadri is the only player to have played fewer than 100 games in his first three seasons.

If we control for icetime, Kadri finds himself squarely in the middle of the pack. 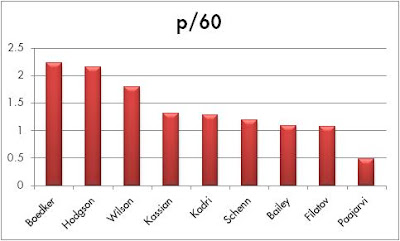 Above are the points per 60 minutes of icetime figures for Kadri's closest comparables, taken 3 years after they were drafted.  Only Kassian has better numbers than Kadri among players from the 2009 draft class.  While Paajarvi has struggled mightily this season, his p/60 numbers during the 2010-11 season were right about where Kadri's are now.

What can we glean from this information?  First of all, I would argue that we can say that Kadri is far from a 'bust' or, at the very least, he's no more of a bust than all the forwards taken around him in the 2008 and 2009 drafts.  Secondly, so far he seems to have been the right choice for the Leafs when they made their 7th overall selection in 2009.

Hardy wrote that, "a resolution to avoid an evil is seldom framed till the evil is so far advanced as to make avoidance impossible."  Leaf Nation needs to take a pill when it comes to Kadri's development and avoid labelling him as anything other than a prospect at this point.  He's not a 'bust'.  He's not a 'stud'.  If you've made up your mind to give up on Kadri, I think you'd be making a big mistake.

The moral of the story is that prospects take time to develop.  As Leaf fans, we really shouldn't be souring on Kadri so soon because objectively he's right on track.
Posted by Curt S at 4:35 PM

Well done. That is really all I have to say