It isn't hard to find a negative piece of writing on the Leafs these days.

The team has lost two games in a row by a combined score of 12-1 and the win that preceded these losses was a game where they were horribly outshot by the last place Columbus Blue Jackets, so it shouldn't really be any surprise that so much ink has been spilled decrying the Buds.

Truth be told, it wasn't hard to find negative stuff while they were winning either.

I suppose we shouldn't be surprised by this.  The team has ranged from mediocre to abysmal since the lockout and has yet to make the playoffs, there weren't any prospects in the system that were expected to make significant contributions this season, and the offseason acquisitions were more akin to tinkering around the edges than re-creating a foundation.  Why shouldn't the fans and the media be skeptical of this team?

The Sky Is Falling

During our win streak, detractors pointed to a poor penalty kill as a reason the Leafs fast start wasn't sustainable.  The team often surrendered more shots than they created.  Phil Kessel is a streaky player and of course he'll go through one of his infamous slumps.


In Tuesday's loss to Florida, the Leafs killed both of the penalties they took and outshot Florida 38-28.  In Boston on Saturday they surrendered a mere 20 shots to the Stanley Cup Champions.  Having addressed many of the gripes, the team lost and at the end of the day, that's all that matters.  Wait... what?

There are some very real problems with the Leafs right now.  The goaltending since Reimer's injury has certainly been a problem.  At 27, it appears Gustavsson will never live up to the fanfare he received as a highly sought after undrafted free agent.  For Ben Scrivens there's still time but it's becoming increasingly apparent that his time isn't now.  The team needs Reimer healthy or needs to pursue a goaltender from outside the organization.  If the playoffs are going to be a possibility for this year's team, there is no other alternative.

Special teams do need to improve.  A 21st ranked powerplay and 30th ranked penaltykill aren't going to cut it.  There seem to have been improvements in these areas but there's still a long way to go.

Maybe Things Aren't So Bad After All

Apparently, Phil Kessel is slumping.  I'd like to point out that in 4 games in November, Kessel has 4 points (1G, 3A).  Any idea how many point-per-game players there were in the NHL last season?  Fifteen.  And that includes Derek Roy who only played 35 games.  If this is a slump, I hope he's in a slump the rest of the season.  There are people out there who are looking for a Kessel story that simply doesn't exist.

Looking at the NHL's top ten scorers, there are two Maple Leafs (Kessel, 22 and Lupul, 17).  Dion  Phaneuf is 7th in scoring among defensemen and John-Michael Liles is tied for 14th.

Our goaltending of late has been bleak but as JP at PPP points out, the price of acquiring a replacement level goaltender isn't all that high -- certainly not prohibitively so.  Nabokov has been the rumoured name and the rumoured price is a 2nd round draft pick.  Not so bad, really.

Oh, and also, there's this (courtesy of Yahoo! Sports): 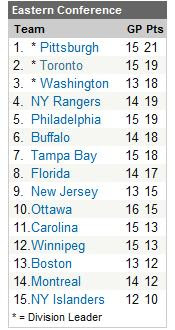 Let's just say it might be a little early to start pushing the panic button just yet.﻿
Posted by Curt S at 2:06 PM

man thats a pretty slim point spread. At first i was giddy looking at how close we were to taking the confrence again, but then I saw how close we are to Florida and I got a terrible feeling inside.

I'm not so sure that NJ (with their defense and an unsteady Brodeur), NYR (with no M.Staal), FLA (not sure why they're even on that list) or, MTL (would need Carey Price to be ridiculous) are any better than the Leafs actually -- even if we were to wash away the strong start.

Do I expect the Buds to finish first in the East? No. But there's no reason they can't finish in the top 8 this season.