Joffrey Lupul And The Toronto Maple Leafs: The Right Player for the Right Team

If you're a Toronto Maple Leaf fan, the chances are that you've got a friend who's an Oilers fan.  Ask anyone to explain this phenomena and they'll be unable to do so but, for some reason, we just get along.  It's particularly evident in the blogging community where the relationship between the two fanbases is one of mutual intellectual respect.

In my case, one of my best friends is an enormous Oilers fan and he's probably the guy I spend the most time talking hockey with.  For this reason, when Joffrey Lupul was traded to the Maple Leafs, my first reaction was to hope that Jake Gardiner was a very, very good prospect.

Joffrey Lupul was the key Oilers' acquisition in the deal that sent a disgruntled but extremely effective Chris Pronger from Edmonton to Anaheim. After one abysmal season in Edmonton, Lupul and Jason Smith were traded to Philadelphia for Pitkanen, Geoff Sanderson, and a third rounder.

Now as a Leaf fan, your Oiler fan friends were probably laughing that you'd traded a solid defenseman for Lupul and an unknown quantity.  Lupul still had two more years at $4.25M, he's lazy, he's injury-prone, and he never came close to living up to the 30 goal potential he showed in 2005-06 as a 22 year-old in Anaheim.  Simply put, Oiler fans hate this guy.


And rightfully so.  Chris Pronger had just finished carrying the Oilers to the Stanley Cup Final and would go on to do the same for the Ducks.  Lupul's one season in Edmonton saw him put up 28 points in 81 games coupled with a jawdropping -29 rating.

So when Lupul came to the Leafs, most of us were bombarded with a long list of negative adjectives from people whose opinions we generally greatly respect.  At the same time, we hear our GM talking about how he believes Lupul is an upgrade to our top-six forwards and how he wouldn't have done this deal if Lupul were not included.  But then again, Brian Burke says a lot of things.

I have to admit, I couldn't remember much of Lupul's play so I generally fell in with the Oiler fan narrative.  I'd heard and read good things about Gardiner and his skating long before this trade went down so it seemed plausible to me that Lupul was all of the things that I had heard he was and that Gardiner was the key to the deal.

If we look at the stats though, Lupul has generally been a top six forward kind of player.

With the exception of his one year in Edmonton, Lupul has consistently exceeded 0.6 PPG which is a pretty good rule of thumb for what constitutes a productive top-six forward.  The problem for Lupul has been staying healthy and he's got a reputation for being injury prone.  Truthfully though, he's only had two significant injuries, a spinal cord contusion in 2008 and a back injury in 2010.  The problem for Lupul was an infection that followed surgery and kept him out of the lineup for the better part of a year.  That hardly warrants a reputation for being injury prone. 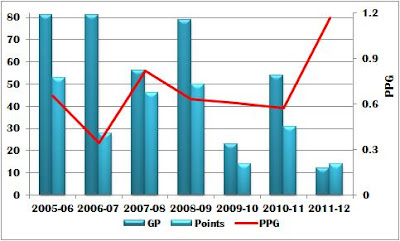 When we look at Lupul's production, we can see why Oiler fans dislike him so much.  Adding a little bit qualitative analysis to the numbers, the injury in 2009-10﻿ was said to have had an effect on his production for that year, as well as the following season as he got himself into game-shape.  On top of this, Lupul wasn't skating on the top-six in Anaheim which certainly would have had an effect on his per-game production.

With this in mind, it's not surprising that Lupul's numbers have spiked in Toronto.  At 27, Lupul is entering his prime, he's healthy, and he's getting plenty of opportunity with the Maple Leafs.

If I had to guess at his PPG, based on precedent, I would say he's probably a 0.65 PPG player.  If we project this out over the remaining 70 games and couple it with his fast start, Lupul projects out to 59.5 points this year.

As good as Gardiner has been this season, Lupul's play has supported Burke's position at the time of the trade.  Lupul has been an upgrade to our top-six forwards and while his point-per-game pace is surprising, the fact that he's a valuable member of our forward corps shouldn't be.
Posted by Curt S at 1:49 PM