Success At The Draft: 10 Years Of Maple Leafs Draft Picks

The Toronto Maple Leafs don't know how to draft or develop players; we hear this all the time.  Just last week, Damien Cox wondered if the Leafs had finally figured it out as Kadri and Frattin were both making a meaningful impact at the NHL level.  Well, it may surprise a lot of you to hear this given what you're forced to read, but the Leafs are actually pretty good at drafting players.

An interesting post by Aaron Chan over at Maple Leaf Muse got me thinking about the Leafs' track record at the draft.  I've always felt like it was better than they got credit for.  Aaron made some interesting points but I wanted to be a little bit more precise with how picks are compared to one another.

With that in mind, I looked at 10 years worth of draft data (1999 to 2008) and the results are impressive.  Over this 10 year period, the Leafs had a first round bust rate of 14% (note: The only bust, Luca Cereda, is an interesting case. He was diagnosed with a heart defect the year after his draft.)  Their median first round draft slot over this time was 21st which makes the low bust rate particularly impressive.  When compared to the league-wide bust rate of 42% among first round draft picks, the Leafs' draft record stands out yet again.  The Leafs' impact draft rate in the first round was over 70% compared against a league-wide average of roughly 39%.

In the second round, the Leafs had a bust rate that was slightly lower than league average and their record for drafting impact players (top-6 forwards or top-4 defense) was double that of the rest of the league.

In the interest of full disclosure, I combined the third and fourth round when looking at the Leafs' picks and compared those against third rounders of the rest of the league.  I haven't parsed the entire league past the third round and the Leafs' third round numbers are abysmal relative to their fourth round numbers (which we'd clearly expect to normalize over time.)  Basically, given the disparity between the two numbers, I think that the n is the issue and not that the Leafs have some mysterious hex placed on their third rounders.

Once again, the Leafs are two-and-a-half times more likely to find an impact player in these rounds than the league average and also have a slightly lower bust rate.

Over this 10 year period, the Leafs also added Ian White and Carl Gunnarsson in rounds 6 and 7 (where they have an 8% impact player rate -- the league-wide average is 4% by the third round.)

Below are graphs comparing the figures for the Leafs and the rest of the league: 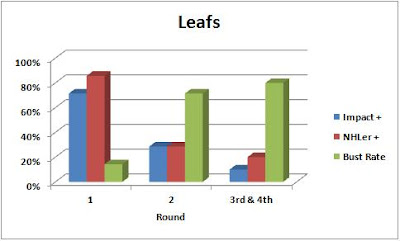 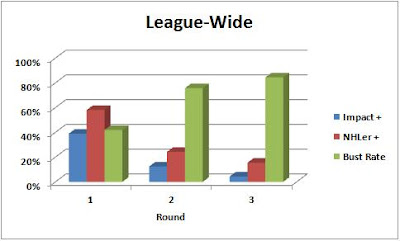 These results are even more dramatic if we consider that Dave Morrison has been our current director of scouting since 2006 (3 of the drafts above.)  In the 2006 draft alone, Morrison added Tlusty, Kulemin, Reimer, Holzer, Stalberg, and Komarov.   In 2007, with no first or second rounder, he added Matt Frattin and Carl Gunnarsson.

In short, the Leafs don't have a drafting problem, they have a problem with trading away prospects and draft picks.  During Dave Nonis' tenure as GM of the Vancouver Canucks, he hoarded prospects and picks which might be the best thing for the Leafs future given their success on the draft floor.
Posted by Curt S at 9:13 PM

Curt, thanks for the constructive comments and glad to see such a thorough follow-up on your part. Wish we could have an actual discussion about this topic because I think it warrants attention - especially if hording picks is Nonis' M.O. going forward. Nonetheless, you're coming at this from an interesting angle and hope the readers get into the conversation as well. Looking forward to your work.

the last decade or so the leafs have been pretty good (as seen by the numbers), but the reputation came from somewhere (and a lot of it probably had to do with development of the prospects they actually kept).

then there are years like 2003, in which the only NHL player the leafs drafted was john mitchell... when the only player you get out of one of the most talented draft classes in history is john mitchell, it was a terrible draft.

You're right about it being a shame that the Leafs didn't catch a piece of the '03 draft but their first pick that year was 57th overall. Again, more of a problem with trading picks than actually drafting poorly.

Might be worth trying to correct for the value of the Leafs' picks. I mean, it's one thing to note that the Leafs have done above average in the first two rounds, but you would expect them to do above average when they haven't picked past 15.

It's actually the opposite. The post looks at drafts between 1999 and 2008 wherein the Leafs only had two top-15 picks (Schenn at 5 and Tlusty at 13.) As I mentioned, their median draft slot was actually 21 (average of 18.3) so really you'd expect them to do below league average and yet, they're well above it.

Great analysis. Something looks off with your charts, though. Shouldn't your three bars in each draft-round add up to 100% for Impact+Replacement+Bust?

The NHL'er+ (replacement level or better) bar measures all NHL-calibre players (including those who are impact players). To get to 100%, you can sum that bar and the bust bar (but exclude the Impact+ bar)