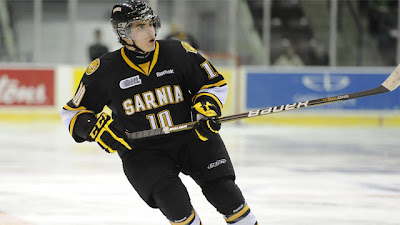 The other possible picks between 2-5 (Forsberg, Grigorenko, Murray, Galchenyuk, Dumba, Rielly) are all fantastic prospects, but, despite their talents, the consensus among hockey pundits is that Yakupov is the clear decision at number-1. It’s difficult year-to-year to determine the exact difference between picking 1, 2, 3 and so on as the depth of the draft class, team needs, assest bases...etc all inevitably complicate the matter.

In an attempt to simplify the question of “Should we trade up?” I took an in-depth look at the statistical difference between drafting 1st and 5th over the past 10 NHL drafts. Based on these findings I was able to come to a very clear conclusion.

Below is the methodology used and some key omissions:

Shown above are the raw NHL career totals for each of the player groupings. You’ll notice the significant difference in production between the 1st forward taken and the 5th. 2,365 total goals from the 1st selection compared to a meager 442 from the 5th.  A sizeable difference in games played also suggests that there's a much higher risk of 'bust', unsurprisingly.

The results trend downward steeply from the 1st to 3rd, yet seem to bump up at the 4th forward taken. This anomaly is due to a number of solid NHLers being taken in that slot, including Scott Hartnell, Stephen Weiss, and Phil Kessel.

Looking only at these totals it’s clear (as logic would dictate) that choosing a player first or second gives your team a significantly better chance of landing a star NHLer. I realize this is not groundbreaking news (insert reader eye roll) as choosing earlier in the draft gives your team the best chance of selecting a star player. However, where the statistical difference becomes glaringly evident is when you look at the player stats extrapolated over an 82-game season, as shown below.

What the chart above shows is that if your team chooses 1st, you can reasonably expect a player that will produce 80 points per season. With an outstanding 37 goals, 43 assists, and 281 shots on goal. During the 2011-12 season, only 9 skaters amassed more than 80 points. To put it bluntly; recently, if you draft 1st you’re virtually assured a franchise player that will be among the top 10-15 scorers in the league in any given season. This group includes players such as John Tavares, Steven Stamkos, Alex Ovechkin, Sidney Crosby, Ilya Kovalchuk, and Dany Heatley.

The 2nd forward taken averages out at 30 goals, 38 assists, for 68 points to go along with 226 shots. A respectable stat line, and a player you’d be happy to have on your 1st line. This group includes players like Matt Duchene, Jonathan Toews, Bobby Ryan, Nathan Horton, Jason Spezza, and Marian Gaborik.  These guys will have seasons where their production spikes but are also prone to the odd down year.

Where the numbers really start to dip is we get to the 3rd and 4th forwards taken. The average production for a player taken 3rd and 4th over the 10 year sample we examined is 45 and 49 points. Those are surprisingly low outputs, when you consider the excitement and anticipation around a player drafted so high. These are players that may find a role in your top 6, but in some cases are relegated to your 3rd and 4th line. This group of players includes names like: Gilbert Brule, Benoit Pouliot, Thomas Vanek, Raffe Torres, and Stephen Weiss.  Unsurprisingly, we see a pretty significant variance in the calibre of player that these picks will yield.

Finally we arrive at the most alarming part of the data (this is when I frantically bbm’d Curt S with a hysterical “OMG, we're totally screwed”). The average annual production of the 5th forward drafted between 2000 and 2009 is 16 goals, 23 assists, for a total of 38 points, with 155 shots. As an aside, Matt Cooke had 38 points last season.

What surprised me the most about the findings is the distinct drop-off in production from the 1st and 2nd forward sections to the 3rd, 4th, and 5th. My opinion heading into the Leafs offseason was to firmly stay the course, draft a quality player at 5 and retain the improving asset base both in the NHL and the minor leagues, however, after looking at the numbers collected above it’s almost impossible to make an argument against trading up.

The reported asking price from the Oilers is a defenseman, a prospect, and a draft pick to make the jump to number 1.  This is a rare situation whereby the Oilers may actually prefer to trade their pick. With a roster already heavy on young, offensive players on entry level deals, Edmonton is in need of a more balanced roster. The price will certainly be high for Yakupov, but it has been a long time since the 1st overall pick has ever been this available if a team comes forward with the right pieces.

There will undoubtedly be risk no matter where we pick and I suppose Yakapov could very well be the next Alexander Daigle or Patrick Stefan but the numbers don’t lie, and we may never be better positioned to take a run at the 1st overall selection than we are today.

Buzz Aldrin has had to live through 40 years of sound bites and grainy moon footage of Neil Amrstrong sneaking out of the cockpit onto the moon mere moments ahead of him and galvanizing the world with 10 simple words. I don’t want to spend the next 15 years watching Nail Yakupov win scoring titles, and Hart trophies wearing Edmonton blue with the knowledge that we were oh-so-close to having him.
Posted by Darren K at 6:30 PM

I wonder if the generational talent for #1 (ie. Crosby) skews your data? Anyway if he can be had for what you say the Oilers want, then yes do it. I think the Marlies can supply a replacement for a d-man the Oilers would want off the Leafs roster(Gunnarson or Franson possibly) , and with the Leafs #5 pick they can probably draft probably the #1 d-man, so get it done Burkie! It would be a win-win trade.

I think you're right - having guys like Crosby and OV going first overall, and breaking into the league at such a high level (both breaking 100 pts as rookies) likely skews the data a bit.

That said, there are players such as Malkin and Gaborik were choosen second overall, and the numbers for #2 are still relatively low.

Hopefully the numbers even out, and over the 10 years give a pretty good read. It would be nice to run the data over a broader range (say 25 years) but I fear that different eras and scoring would further skew the results. (Let's blame Gretzky, and the 80s)

I'd draft Murray, and trade to get a 2nd first round pick in 2013. Can you see it? Murray collects the puck, moves up ice, snaps a pass to Lazar, Lazar turns in and drops it to Monahan, he shoots, he scores!

Buzz Aldrin was the first astronaut to make a guest appearance on The Simpsons, in a classic episode no less. If that is the price you have to pay as the 2nd man on the moon, I would take it; no questions asked.

Kessel was 5th overall but he was the 4th forward (Erik Johnson went 1st overall).

Burke should look at using a late round pick on Carter Rigby of the Kelowna Rockets. He has siz, hits, goes hard to the net and scored 20 goals as a rookie in the WHL.

The Leafs have the 5th overall pick which could result in picking the 3rd and most likely 4th best forward. Columbus and NYI may go with a d man. If we trade up to get Yakupov then we still have not addressed any of our top 2 needs on this team. Firstly we need a goaltender and secondly we need a first line center to play with Kessel. I rather stay at fifth and take my chances at the 2 G boys. Either Galchenyuk or gregorenko. They are both centers and meet our needs. If they or Forsberg are not available then consider trading down to the middle of the draft and adding a second rounder. I dont think yakupov will be as good as any of the 5 first forwards taken and besides it will take more and our first and Franson to get Edmonton's first. They would be looking for a roster player like Shenn, a prospect like Colburne and our fifth overall. Thanks but no thanks, I rather keep what we have.