The Wonderful World of Hockey 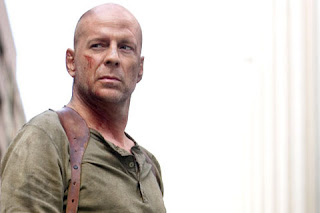 I love the smell of hockey in the morning.

Is there anything better than hockey season? I mean really. Waking up everyday – watching sports center 3 times over (because once is never enough) while updating your fantasy roster and sifting through the daily headlines online at ESPN, TSN and (insert shameless self promotion here) everyone’s favourite hockey blog, Blue Chip Prospects.

Yes it’s a great time. And as we approach the start of training camp there are a number of things I’ve noticed from around the wonderful world of hockey.

1. Daniel Sedin is by far the best of the Sedin sisters - especially in terms of fantasy value. He is a winger, he scores, he shoots, and will have a fantastic plus minus rating. Had he been healthy all year his numbers would have easily surpassed Henrik. I’m baffled as to why Henrik (a center) is coming off most draft boards first.

2. Player that will surprise you this year: Alexander Frolov. His move from the bright lights of LA to the even brighter lights of New York will give him the fresh start he so desperately needed. He has always had the physical tools to be a 40 goal scorer in the right situation – which he is now in.

3. Did anyone else see Crosby taking batting practice with the Pirates last week? The guy jacked a no doubter to right field with a wooden bat! Could we have another two sport pro athlete?

4. Was in the middle of a Die Hard marathon the other day with my roommate when I had a revelation. Live Free or Die Hard might be the best of them all. I know its blasphemy to say that – given how purely awesome the first instalment was. But come on, I mean John McCain shoots himself through his shoulder, into the bad guy, while saying the classic “Yippe Ki Yay Mother F%&#er.” About as bad-ass as it gets.

5. Will the penguins ever do the obvious and move Malkin to the wing with Jordan Staal down the middle? It seems so obvious to me – as this would create two lethal scoring lines up front. Yes Staal is a fantastic checking center, and yes it’s pretty sweet to roll out Crosby – Malkin – Staal down the middle. However, Tyler Kennedy is more than capable of leading the 3rd line. Come on Bylsma!

6. Shhhhh don’t tell anyone, but Martin Brodeur is still the best goalie in fantasy hockey. No one seems to talk about this, and guys like Miller, Luongo and Lundvist will continue to come off draft boards ahead of Marty B.

7. My favourite tough guy turned goal scorer is officially David Clarkson. He is likely to get a top 6 role in New Jersey this year which will lead to around 20 goals. But don’t think he’ll forget about his other job – protecting Kovalchuk and Parise from dirty S.O.Bs (yeah Carcillo, I’m talking about you)

8. Lately the list of players I loathe in the NHL has been growing. Current players on the list include Jordan Tootoo (just as dirty as they come), Mike Richards (you know what you did to Booth), Daniel Carcillo (you fought Marian Gaborik!), and Steve Downie (watching him try to blow out Crosby’s knee last year made sick).

9. Bounce back player of 2010-2011: Milan Lucic. Injuries have been a recurring issue for Lucic, but he should be back to 100% this season. Expect a return to 25 goals and 50 points with around 120PIMs. Those numbers could even be higher if he gets some PP time with the likes of Savard and Horton.

10. Why is everyone so high on Ryan Miller? Yeah he is a good goalie, but let’s please stop pumping his tires for a moment. He is 30 years old and has one elite season under his belt. This is not Brodeur, Lundqvist or Luongo. If Miller can stay healthy and put up elite numbers again this season I’ll reconsider my position.

11. Damn you, Mike Fisher. I know jealously is frowned upon (apparently is not a good character trait), but this guy plays hockey for a living and goes home to curl up under the covers with Carrie “too gorgeous for her own good” Underwood. Life just ain’t fair.

12. The one superstar no one is talking about: Jason Spezza. He is not even 30 yet people seem to have given up on this guy. He has some issues with turnovers, but remains an elite centermen. Expect a big season in 2011 and a re-emergence into the upper echelon of playmaking centers for J-Spez.

13. 65 – the number of goals Ovie will finish with this season. The disappointment of the Olympics mixed with an early exit to Montreal in the post season is sure to have Ovie’s competitive juices flowing. He will never be more motivated in his career, as a result I expect career numbers from the games most electric player.

14. Guy I’m rooting for this season: Vincent Lecavalier. I’ve always had a thing for Vinny – for a few seasons he was the future of hockey – the game’s biggest and brightest young star. As he moves into his 30s I hope that he can have a few more solid seasons, and put the past 2 years of injury woes behind him.

15. Crazy fact of the week – Martin St.Louis has played almost 100 career NHL games LESS than Vincent Lecavalier. Despite being 35 Marty has very little NHL mileage on him. Those of you expecting him to slow down in the coming seasons will be sorely mistaken – he will remain a top 10-15 winger for 2-3 more years.

16. Most underrated goalie in hockey – Tomas Vokoun. It took a while for him to escape the goalie platoon in Nashville, but he finally established himself as one of the game’s best. A free agent at season’s end, wouldn’t he look good in blue and white? Unless of course your happier with Giguere between the pipes (ha)

17. Justin Long is really starting to piss me off. I loved him in the movie Waiting with Ryan Reynolds (an absolute cult classic, if you haven’t seen it before) but lately his behaviour is bothering me. These Mac vs PC commercials have gone on far too long and then he starts dating Drew Barymore. Really? You grow up and become a big movie star so you can date an aging Drew Barymore? Charlie's Angels was almost a decade ago, and it’s been a steady decline since then – I don’t care how much cover girl she wears.

18. Is anyone else excited to see what the Blue Jackets will do this season? With Nash, Voracek, Brassard, Filatov, and Mason leading a strong young core the sky is the limit for this franchise. Let’s hope they put it all together and can finally play a more attacking style with Hitchcock out of the picture.

19. I hate Philadelphia fans. First you champion guys like Mike Richards, Daniel Carcillo and Chris Pronger. Then, you run Donovan McNabb out of town because he can’t win you the big game. Yeah, I guess years of playoff appearances, NFC Championships, and a trip to the Super Bowl weren’t enough. The guy has had to play smack dab in the middle of the Peyton Manning, Tom Brady and Brett Favre era – give him a break! Message to Philly fans – appreciate your stars! You don’t know what you have til it’s gone....

20. I couldn’t write an entire article without talking a bit about our beloved Leafs. Despite becoming a bit of cynic in recent years, the naive kid in me is already starting to imagine a strong start to the season and a triumphant march to the post-season for the Blue and White. That’s the great thing about the eve of training camp – we fans get to dream.
Posted by Darren K at 4:52 PM